Our lovely view of regatta course was obliterated by sponsor's flags 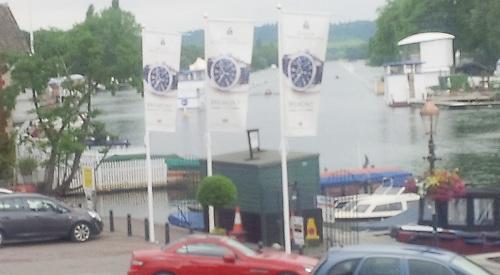 ADVERTISING flags which were put up ahead of Henley Royal Regatta have been removed after residents complained that they blocked their view of the river.

The three flags, which bore images of watches made by Bremont, a Henley company and official regatta sponsor, were installed on flagpoles in Thames Side.

Residents of a block of flats said they ruined their view of the regatta course.

Craig Nayman, who has lived there with his wife Sue Butler since 2008, said he was horrified to see the flags days before the start of the regatta.

Mr Nayman, a commercial director, said: “The whole principle of the apartments is the great view that goes down the regatta course. It’s one of the most iconic views in the world and goes down to Temple Island. That’s why we bought the flat in the first place.

“Last week I went to London and when I came back the following afternoon, to my horror, the town council had erected these flags. What would I rather look at: Temple Island or three Bremont watches on flags?”

He complained to town manager Helen Barnett, who agreed to remove the flags on Tuesday and relocate them to Market Place. Mr Nayman said: “I asked if they had proper planning permission and how it came about, because no residents were talked to about it. She said they had taken the proper process.

“No one is guaranteed a view but I’ve lived in Henley for 35 years and you are striking a fine balance between having something like this and the commercial impact is has.

“For me it’s about the principle of the council just doing this without any real consultation with neighbours. I feel the council has missed the point on this one and not thought about the impact.

“If no one had stood up and objected the flags would have stayed up. It wasn’t just me, a number of residents were directly affected.

“At least the council listened and reacted and that’s positive but the things should never have been there in the first place.

“I don’t know if she has fixed it indefinitely I’m assuming it’s a long- term solution. Fair play to Helen — she responded quickly. We are happy now in Thames Side.”

Ms Barnett said: “It was my suggestion to put the flags there because it’s Bremont’s first year of sponsoring the regatta. The flagpoles were agreed by the council before I started.

“There were concerns from two residents so we had a chat with Bremont and agreed to relocate the flags. Bremont were brilliant and totally on board.”

Ms Barnett said council will now consider whether to use the flagpoles in Thames Side in future.

“We will consult residents because we want a solution that suits everybody and don’t want to upset anyone,” she said.

In August, councillors agreed to spend £4,000 installing flagpoles along the river in Henley.

Three were put up in Mill Meadows — by the obelisk, next to the bandstand and by the River & Rowing Museum with two others at the bottom of New Street and by Singers Park.