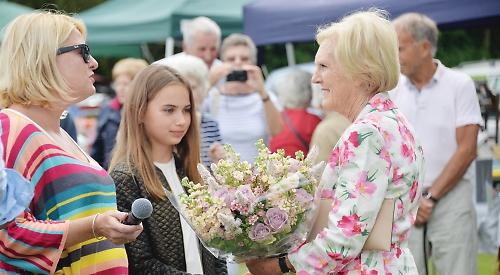 MARY BERRY was the star attraction at Nettlebed village fete.

The food writer and television presenter judged a cake-baking contest and a children’s art competition at the event on Saturday.

Berry, 82, who recently bought a house in Henley with her husband Paul Hunnings, arrived with actor Simon Williams, who lives in Bix and had invited her.

Berry said: “Simon asked me to come and I was delighted to say yes as we are moving to Henley, just down the road.

“I’m delighted the village is keeping up traditions like this lovely fete. Events like this give everyone a chance to take part and give a small amount. It’s a lovely day.”

The fete took place at the recreation ground off Watlington Street and raised £3,800 for the Nettlebed Sports Association, which helps pay for the upkeep of the pavilion and recreation ground and gives money to the village cricket and netball teams.

Berry, who wore a white floral jacket and pink skirt, was swarmed by fans who asked her to pose for photographs. She also signed copies of her books.

Villager Emily Simmons presented her with a bunch of flowers to thank her for coming. Berry made her way around the fete, speaking to all the stallholders.

She also spoke to the crowd over the sound system, urging everyone to continue supporting the event in future.

“I’m delighted to be here,” said Berry. “It’s great you are raising money for the cricket club, therefore you must give generously.

“You must always tell people about events like this because they are part of British tradition and do all you can to support and help.

“You won’t need that plant or something else but you should still buy it anyway. It’s all about keeping these events going.”

The competition to bake a Victoria sponge cake was split into three categories for children, men and women.

Berry picked up some of the cakes to inspect them and check for a soggy bottom and broke bits off to taste — watched by entrants crowded round, eager to see what she thought of their efforts.

The winners the in children’s category were George Gudjohnsson and Daisy Riddlesworth. The men’s winner was Elko Titcombe-de Bie and the women’s category was won by Annabelle Bacon.

The winners of the children’s art competition to design a cake were Ivo Serraille (year one), Lucy Robb (years two and three), Maisie Hillier (year four) and Gwennie Hunter (years five and six).

Other attractions included a fancy-dress wheelbarrow race, which included two stops where competitors had to drink a beer as quickly as possible. Competitors’ outfits included Scooby Doo, ET, two bananamen and a nun.

Paralympic gold medallist Naomi Riches ran a stall challenging attendees to see how far they could row on an ergo in one minute.

There were also traditional games like beat the goalie, skittles, a coconut shy, hook-a-duck and guess the weight of the cake.

Members of Nettlebed Cricket Club volunteered to be soaked with buckets of water by visitors who could hit a target by throwing a cricket ball. Fete organiser Jodie Butler, from Catslip, thanked Mr Williams.

“He is the main guy who helps us to get someone famous to come,” she said.

“The crowds when Mary arrived were unbelievable. I almost felt like her bouncer when we were walking round. She is very well-loved and everyone was desperate to see her.

“It was the busiest fete we have ever had, to be honest. By the end all the food and drink was sold out and the £3,800 we raised is apparently the most raised in all the years of the fete.”

The village will hold its annual Party on the Rec on July 15 from 2.30pm to 11.30pm. There will be live music, a licensed bar and a circus workshop.

Tickets can be bought in advance from Life at Nettlebed, off High Street. They cost £10 for adults, £5 for OAPs and £2.50 for children.