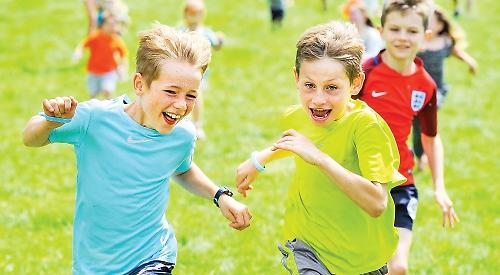 A 10KM runner completed an extra 6km after getting lost en route — and still won the race.

Paul Rogers went awry during the second annual Checkendon race due to a shortage of marshals along the course caused by an outbreak of chickenpox at the village pre-school.

Some marshals had to drop out due to the outbreak days before the race on June 11.

Race organisers found replacements but some of them were not familiar with the course for the run, which started and finished at Hammonds Farm.

Charlotte Nicholl, a member of the organising committee, said a few of the serious runners were affected, including Mr Rogers, who won in a time of 56 minutes and 30 seconds.

She said: “We rely on volunteers but we had chickenpox go round the school the week before so we were short of marshals. We had some marshals who did not know the route clearly so some of the runners went off course slightly.  The winner ran 16km according to his sports watch and still managed to win.

“It really only affected the serious runners and anybody who was upset we offered the entrance fee back but once we explained it was a charity event they were understanding. I think we refunded three people.

“Next year we are looking to have chip times so we can have accurate timings and placings.”

About 100 people took part in the event, which also featured a 5km race as well as 2km, 1km races and a 100m dash for children.

The 2km was won by Tilly Ogsden with Ethan Shuttleworth second and Ben Chapman third.

The prizes were presented by Andy Triggs Hodge, a British three-time Olympic rowing champion who lives in the village.

He also posed for photographs with the children and showed off his medals.

Mrs Nicholl said the event was much bigger than the first run a year ago. She said: “We only had about 25 last time and this year it was about 100.

“Last time we were very much off-road running in the woods but this year we went on the roads down the valley and into Ipsden. We had a lot of positive comments about the route.”

The event raised about £2,000 for the pre-school with more money still coming in. The money will go towards equipment.

Mrs Nicholl said: “We are very much a set-up-and-put-away pre-school as we are in the village hall, so we have to choose what we buy carefully.”

She thanked Bill Beeton, owner of Hammonds Farm, for allowing the use of his land and the other organisers, Hannah Pivonka, who chairs the pre-school, Ali West and Brian Cullen.

Next year’s event will take place on June 10.