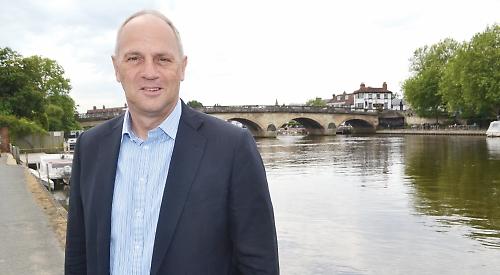 I AM in my third year as regatta chairman and I feel pretty good.

Earlier in the year, I must admit I felt ahead of the game. Everything was on schedule and the set-up of the regatta was in good shape. Then one morning I was driving into Henley when I saw the boat tents up and I thought, “it’s coming round fast!”

I was on the committee for 15 years before becoming chairman and spent a year shadowing my predecessor Mike Sweeney.

We have a fantastic team here and there is a checklist so that we deliver the same standards year on year. With that team I can’t look bad.

Television coverage at the regatta will be the same as last year and the groundbreaking drone we’ve had for the past two years will be back.

When I was rowing any time a camera crew was there they wanted to get in front of us and have us rowing flat out until we caught up with them and went past and you’d end up with wake from their boat.

The drone gives us pictures we’ve never seen in rowing previously, which is why it has made such an impact.

Normally in an Olympic year the national crews don’t come. That was the case with the British team last year but we did have the Dutch and a number of boats who were going to compete in Rio.

We are now out of the Olympic year and the British team will be here. It’s in the rebuilding stage at the moment but we have a handful of medallists from Brazil.

You don’t often get the chance to see the Team GB rowers in action in this country as they tend to race for their clubs.

We have three new events this year: the women’s fours, pairs and double. This means we have all the same open events for men and women.

Because of the status of the regatta in the rowing world we could add all sorts of events and be over capacity but Henley means having the highest standards. It’s still the pinnacle of rowing and that’s what we have got to keep special.

Entries are down on last year, with 577 crews, but it’s still the second biggest we’ve ever had and the biggest American entry ever. There’s no lack of enthusiasm to come.

We don’t want to be any bigger because that means we would have to race the extra crews off early. It’s about quality and having the best possible crews. We are not short of that.