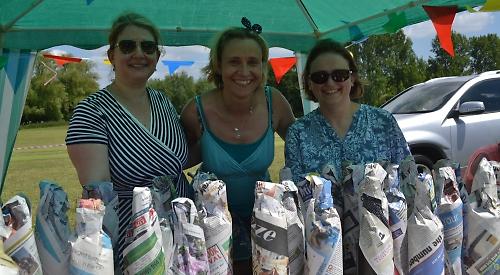 PRIME Minister Theresa May made a guest appearance at Charvil village fete.

The Maidenhead MP was among hundreds of people to attend the event at the pavilion in Park Lane instead of the usual venue of the village hall.

It was part of the Great Get Together, a series of events across the country in memory of murdered MP Jo Cox.

Mrs May, who had travelled to Charvil after attending a meeting of a taskforce for the Grenfell Tower fire earlier in the day, paid tribute to Mrs Cox, while Iona Lawrence, director of the Jo Cox Foundation, also attended.

There was also entertainment from Uncle Charley and fairytale princesses, Belle from Beauty and the Beast and Snow White.

Vince Martyn, chairman of the fete committee, said: “It went very well, although I spent the day in a little cell doing all the announcements.

“The change of venue seems to have worked and it was a lot easier for attractions like the mini-railway.

“I’d like to thank Emma’s Kitchen, who supported us with tea, coffee and cakes.”