Jess has audience rocking by the river 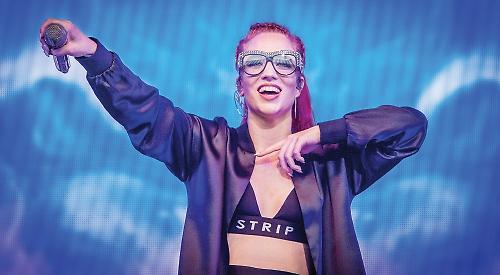 SINGER Jess Glynne launched this year’s Henley Festival with a bang as she performed on the riverside.

The star took to the “floating” stage in a pair of silver flared trousers, a shiny purple jacket and giant sparkly glasses and had the audience dancing from her first song, Right Here.

The thousands of people in the crowd, who were dressed in dinner suits and ballgowns, sang along during the set on a balmy Wednesday evening.

Glynne played some of her best known hits, including Real Love and her first number one, Hold My Hand.

She was flanked by dancers, musicians and backing singers who were wearing black and purple tracksuits. Glynne, whose parents were in the audience, asked the crowd if they were sweating, adding: “I’ve never done a gig like this before with you all in your suits.

“Do you guys do this every weekend?”

She also joked that the lights on the stage were attracting moths after one almost flew into her mouth during a song.

Glynne encouraged the audience to sing along to her hits as the words were projected on a screen at the back of the stage.

“There’s a lot of s**t in the world,” she said. “I make music to make people smile and come together.”

Glynne performed a two-song encore, finishing with her 2015 number one Don’t Be So Hard On Yourself before departing to screams from the crowd.

After the show most people stayed to watch a pyrotechnics show and enjoy the atmosphere.

During the evening there were also performances by comedians Paul Sinha and Stephen K Amos and a Welsh folk group in the Bedouin tent.

The festival site was so busy that several cash registers at bars around the site stopped working.