Thousands enjoy variety acts at fun day for all the family 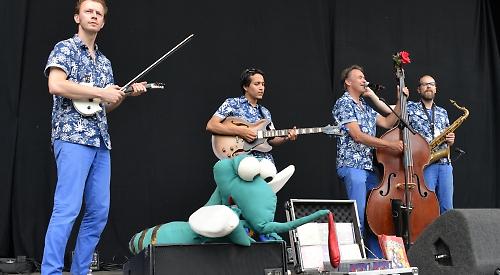 The dress code was relaxed for the final afternoon of the event as parents brought their children into the riverside enclosure to enjoy a programme of music, comedy and workshops.

Henley’s River and Rowing Museum held a picnic themed around Beatrix Potter’s The Tale of Peter Rabbit to coincide with its exhibition about the children’s author, which runs throughout the summer.

Acts on the main floating stage included The Busquitos, a jazz quartet who wandered around the audience playing wireless instruments and playing pranks on them.

The group’s violinist “played” on the heads of spectators in the front row by tapping them with his bow to create different notes. Other highlights included former Britain’s Got Talent contestant Bruce Airhead, who performed magic tricks while engulfed in a giant balloon, and the Inta-Africa musical workshop.

Young Henley musicians, who frequently perform at the town’s Acoustic @ Magoos nights, played in the Bedouin Tent while Henley Youth Choir and Henley Music School joined forces for a performance in the Salon comedy club.

Festival chief executive Charlotte Geeves said it was the festival’s busiest ever family Sunday with an estimated 4,000 people on site.

She said: “We want to grow that Sunday and the content so there’s as much as possible for the family to see. It’s great because we have got a mix of community-led performances and a whole host of other artists.”