Crowds flock to regatta despite downpours 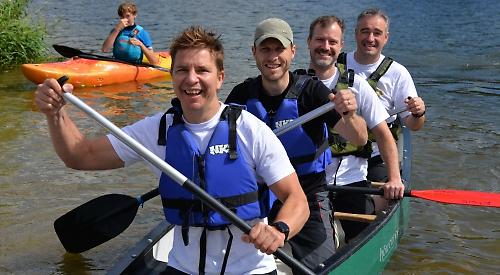 MORE than 2,000 people defied grey skies and downpours to enjoy this year’s Goring and Streatley Regatta.

Despite two outbreaks of heavy rain on Saturday afternoon, spectators flocked to see 43 crews competing in 54 races along a stretch of the River Thames at Streatley Farm.

They took shelter under gazebos on the riverbank and continued to enjoy the spectacle while sharing picnics.

There were races in three classes for men and women and separate events for mixed crews, juniors and children including coxed fours, eights, single sculls and dongolas. The men’s coxless fours race between Goring and Streatley did not go ahead this year due to several crew members pulling out at the last minute.

Instead, the highlight was the eights invitation race in which Shiplake Vikings beat Hillingdon Rowing Club by a length.

There were dozens of family attractions on land, including a funfair, an inflatable slide, a live music stage run by Goring Unplugged and food and drink stalls.

For the first time this year there was an inflatable assault course for children and a performance by the 45-piece Goring and Streatley Starter Band, an offshoot of the villages’ concert band.

Proceeds from the event, which is organised by Goring Gap Boat Club, will go towards its new £350,000 boathouse near Gatehampton Bridge, on the opposite bank from Goring.

An access road is now being built and it’s hoped that the grass-roofed building will open next summer.

Brian Barnes, the club’s regatta chairman, said: “It went very well. Even though it rained, and quite heavily at times, I would say that everyone enjoyed themselves and the rowing was not diminished by the conditions.

“Attendance was down by about 25 per cent on last year, probably due to the weather, but we aren’t concerned about that. When we saw the forecast we worried that it could be much worse.

“It was sunny to start with and didn’t get too unpleasant until about 2pm and 3pm, when we had some heavy but thankfully brief showers.

“The rowers are very much used to it while most of the families were sheltered and continued to enjoy themselves.

“The inflatable assault course was one of the most successful attractions we’ve ever booked.

“It was in non-stop use, even when it was raining very heavily, while the starter band concert was brilliant and drew a huge audience.” The regatta began in the late 1880s but was cancelled at the outbreak of the First World War.

It has been running in its current format since 1992, when the club revived it after an absence of almost 80 years.

The winning crews in each category were as follows:

Children’s dongola challenge — You Ate All The Crisps (Megaw family)