Restaurateur surprised by comedians among dinner party of 25 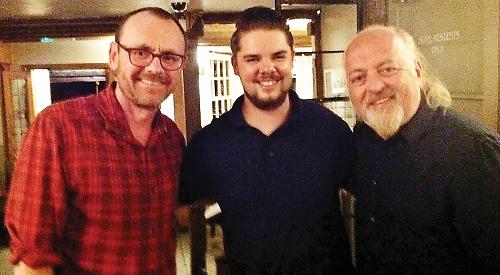 COMEDIANS Bill Bailey and Sean Lock enjoyed dinner at the Miller of Mansfield restaurant in Goring.

The pair were part of a 25-strong group at the restaurant in High Street on Wednesday last week.

Bailey was enjoying an evening’s rest while taking part in a 100-mile walk along the Ridgeway, which passes through the village, in aid of Stand Up To Cancer.

The Black Books star dined with his fellow walkers, including his wife Kristin, and supporters including Lock, who had accompanied him on a series of training walks.

After finishing their meal, the entertainers chatted with staff and posed for photographs with them. Bailey’s group had set off from Watlington that morning and passed through Swyncombe, where they dropped into St Botolph’s Church and were provided with refreshments.

They stayed at the Miller of Mansfield for about two hours before spending the night in Streatley then continuing through the North Wessex Downs the following day.

They finished on Saturday and have so far raised more than £7,500.

Head chef Nick Galer, who runs the restaurant with his wife Mary, gave the walkers hundred of pounds’ worth of meal vouchers to auction for their cause.

He said: “We knew there was a big booking but didn’t realise Bill and Sean were part of that group until they rocked up on the night. I think one of their friends had eaten here before and recommended it.

“They were very relaxed and chatty with our staff and seemed to be having a really good evening. We decided to give them vouchers as it felt like the right thing to do.

“The staff were really pleased to see them and it was a fun night for everyone.

“There were only three of us in the kitchen so we were pretty pushed but they thanked us afterwards and said it had been excellent.”