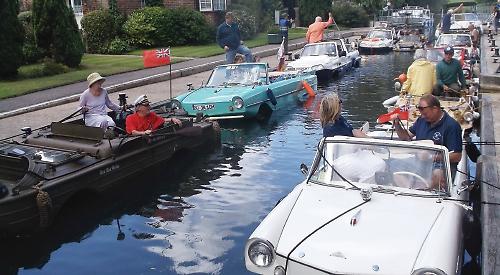 OWNERS of more than 60 amphibious cars from around the world spent a week camping in Henley while taking cruises along the River Thames.

The group, which has been meeting informally since 1988, gathers in a different country every summer and this year it was Britain’s turn.

Co-founder Bob Skinner, from Sussex, decided to stage the gathering in Henley as he and several other members are regular exhibitors at the Thames Traditional Boat Festival, which takes place at Fawley Meadows every July.

Owners came from 11 different countries, mostly in Europe although some travelled from as far as Moscow. They arrived on Saturday and camped by the river on the Culden Faw estate. During this week they split up into groups and explored the Thames at Shiplake, Mapledurham, Hambleden and further afield.

They slept in tents overnight and were entertained in the evenings by local performers whom they had booked.

The visitors were due to pack up camp today (Friday) and cruise to Marlow, where they will exhibit their vehicles to the public.

Many of the vehicles dated back to the Second World War and included a number of Ford GPAs and GMC DUKWs, or “Ducks which were built for use by the American Army. There was also a number of Schwimmwagens, which their German counterpart.

There were also models from the Fifties and Sixties as well as modern-day vehicles which had been converted to run on land and water.

The British participants included Lyndon Yorke, from Marlow, an inventor and member of the Eccentric Club of Great Britain.

Mr Skinner said: “This is a beautiful part of the country and I knew that our visitors would really enjoy it. We haven’t been to Henley before and I think there’s been some curiosity about who we are and what we’re doing.

“There are similar gatherings in America but they struggle to get the numbers because it’s such a big country, so I’m pretty sure this is the biggest meeting of its kind in the world.

“It’s lovely that this event has been going on for so long. I know lots of people who’ve been coming since the beginning — some were just children when they first attended but they now have young ones of their own.

“We’ve had a lovely week and everyone had a thoroughly good time. I knew they would love it because this area is so charming and quintessentially English.”

Ray van Riel, from Holland, who attended with his 1943 Ford GPA, said: “I’ve had a really relaxing time. It’s a shame that the weather was so rainy in the first few days but people tell me that’s typical of England.”