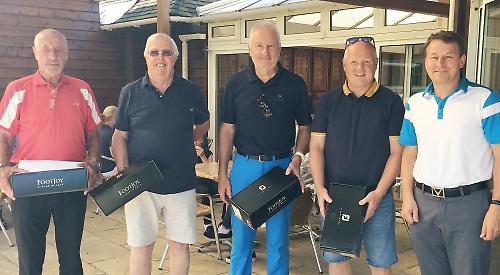 A GOLF club celebrated its 25th
anniversary by staging an open day.

Hennerton Golf Club in Crazies Hill was open to both members and non-members for the competition on Saturday.

Almost 100 golfers took part, split into teams of four. Each quartet played using the Stableford scoring method, where points are assigned according to the number of shots over or under par.

The winners were a team featuring the club’s men’s captain Tony Fiddy plus Chris Whyatt, Pete Burgess and Tony McClements, who finished with a total of 96 points.

They were just one point ahead of a team comprising Martin Green, Martin Cook, William Coulson and Gary Kulpa.

This team had the same score as the all-ladies team of Barbara Langdale, Sandra Turnbull, Glynis Ormsby and ladies’ captain Sandra Woodland but finished second thanks to a better score on the back nine holes.

There were also two “nearest the pin” contests on the fifth and 11th holes, which were won by Mr McClements and Jon Baird. Both won a free hour in the club’s golf studio.

After the competition, the golfers were served a barbecue lunch.

Club professional Glenn Johnson said: “Everyone had a great time, the weather was really good and it was a successful day.

“There were lots of happy faces and cheering.

“We have already had our summer ball and club championship and we have a charity day coming up in September where there will be about 150 to 200 golfers raising money for the rugby charity Wooden Spoon to go towards the Thames Valley adventure playground.”

The club regularly holds events including dinners and talks for organisations such as the Rotary Club of Henley Bridge and the Wargrave branch of the RNLI.

It also holds charity golf days for Camp Mohawk, a day centre for children with learning disabilities nearby.