Chairman steps in to drive community bus for the day 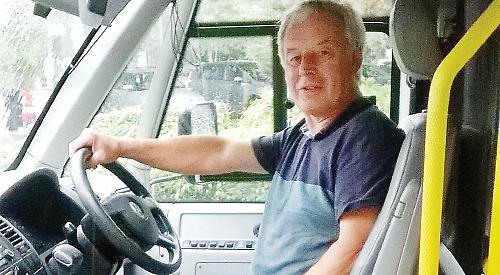 Keith Brooks made four round trips between Goring and Reading at the wheel of the 142 service, which was launched by non-profit operator Going Forward in May.

He signed up as a reserve volunteer driver three months ago and was asked to step in when regular driver Derek Marshall became unwell.

Councillor Brooks, of Hardwick Road, said: “It was quite an experience. I drove from 7am until about 5pm and met various passengers, some going to work and others going shopping in either Caversham or Reading. One group was taking the bus to Beale Park.

“I would like everyone in the village to support the service. There are plenty of spare seats so why not take a trip into Reading and back from time to time?”

The 142 replaced Thames Travel’s 143 service, which no longer serves Whitchurch or Whitchurch Hill after Oxfordshire County Council withdrew its subsidy for that part of the route.

A evening journey has been added on a trial basis, leaving Goring at 6.15pm.

Mike Ward, who runs Going Forward, said: “I’m very grateful to Keith for stepping in to help. We have three or four volunteers in reserve and they’re invaluable for keeping the service going.

“As always, I encourage people to use it as frequently as possible. We don’t get a subsidy so we depend on the community’s support to keep going.”