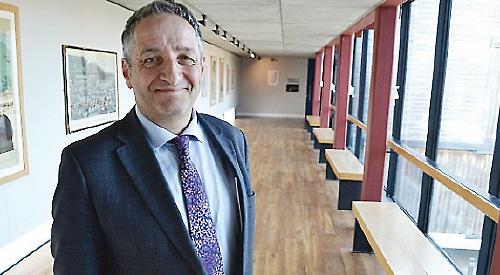 THE chief executive of the River & Rowing Museum in Henley is to stand down at the end of the year.

Ludo Keston, who took on the role in January 2014, announced his departure this week after a summer in which the museum attracted a record 15,000 visitors.

Mr Keston, who lives in Stratford-upon-Avon, said: “This has not been an easy decision for me to make as I have been immensely proud of all the museum has achieved in the last four years.

“However, I have been commuting daily from home and have concluded that I just can’t be the person to help the trustees with their ambitions for the next decade of the museum’s life. After four years, it’s time for the M40 and I to have rather less of each other’s company.”

During his time in charge, the museum in Mill Meadows has welcomed more than 400,000 visitors and built three new galleries, including the Piper Gallery, which honours Henley painter John Piper and was paid for with a £22,000 crowdfunding campaign.

This summer has been the most successful to date, largely thanks to an exhibition on Beatrix Potter’s Peter Rabbit, which runs until September 24. Last month the museum welcomed more people through the door than in any other month during its 20-year history.

Mr Keston said: “As an educational charity, the opportunity to host an exhibition focusing on one of children’s literature’s most well-loved characters was too good to miss.

“It has been wonderful to see so many young children enjoying themselves in the galleries and the museum has been full of local families having fun and learning together.”

He said his proudest achievement was being shortlisted twice in the best family museum category of the annual Kids in Museum Awards.

David Worthington, chairman of the museum’s trustees, said: “We would like to record our thanks to Ludo for all that he and his time have done in the past four years.”