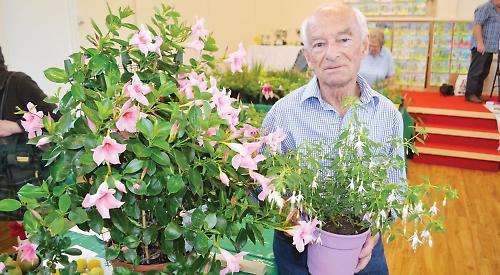 ORGANISERS of the Chiltern Edge Horticultural Society autumn show say moving venues has proved to be popular with visitors.

This was more than 30 per cent up on previous years, when it was held at Chiltern Edge School in Reades Lane and attracted mainly society members only.

Nigel Crush, chairman of the society, said the number of classes had to be cut in order for the show to fit into the Wood Lane hall but the atmosphere was much improved.

He said: “We’re pleased because this year it wasn’t just members, there were people popping in from the village to see what was going on. It had a better atmosphere because there were more people there.”

Mr Crush said the standard of entries was very high, as usual. “There were some lovely dahlias and roses,” he said.

The event was the last for show secretary Michael Wheeler, who is standing down after 10 years in the role following his move to Woking four years ago.

He said: “I reflect on my time in the role with great happiness. I have met a lot of lovely people in the village and the society is such a warm and friendly group. I feel a new person in the role will help to generate new ideas for the shows and I will still come to them and help out on the day.”

Mr Wheeler said there were more than 100 entries, which was about 20 more than last year despite the number of classes being reduced.

“I think the weather has been better this year so that would have helped,” he said.

He was also awarded the Old Barn Cup for most points in the vegetable classes across the spring and autumn shows.

He and his wife Joyce also won the village front garden competition.

She was also awarded the Anne Alderton Trophy for most points in flower classes across the spring and autumn shows.

He said: “I’m a regular entrant. I’ve won the Henley Cup and these ones before twice but I’ve never won two at the same show.”

The society will run a coach outing to Wakehurst Place in West Sussex, next Saturday (September 16).

It will also host talks at Peppard War Memorial Hall in Gallowstree Road as follows: October 10 — “Winter plants” by Thomas Stone; November 14 — “Brook Cottage garden through the years” by Tony Clear. The society’s annual meeting will be held on December 12.