Councillor cuts problem down to size 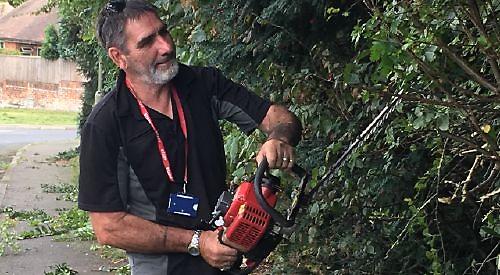 A COUNCILLOR took matters into his own hands after his complaints about an overgrown hedge in Henley were ignored.

David Eggleton used a chainsaw to cut the branches that were hanging over the pavement in Greys Road between the entrances to Green Lane and Gainsborough Road.

They had grown about 2ft over the walkway, leaving only about a foot for pedestrians to negotiate.

Councillor Eggleton, who lives in Gainsborough Road, said he often saw people stepping into the road to pass each other and feared there would be an accident.

He reported it to Oxfordshire County Council, the highways authority, several times over the summer and asked the town council to do the same. However, no action was taken so he decided to do the job himself.

Cllr Eggleton said: “I’ve seen a few accidents on that side of the road and people often come around that blind corner at speed. If someone was walking in the road they might not realise something was coming until it’s too late.

“I’m glad to have done something but it shouldn’t have come to that as it’s the county council’s responsibility. I could understand if it was a small country lane but it’s a major road into Henley that a lot of people use and something needed to be done.

“In the end, I couldn’t let it go because there was a serious accident waiting to happen. If there had been one, I’d have felt guilty if I hadn’t done anything about it.”

A county council spokesman said: “We have one report logged on the Fix My Street website and we apologise that the hedge appears to have remained uncut for some time. The hedge in question appears to be privately owned and it is the responsibility of the owner to maintain it. Ordinarily we would issue a notice to the owner if they failed to do so acceptably.”