Walking to remember loved ones 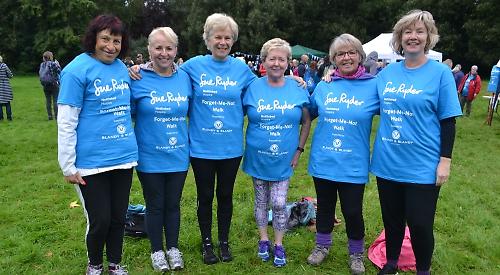 MORE than 250 people took part in a charity walk around Nettlebed on Saturday to raise money for Sue Ryder.

The charity’s second annual Forget-Me-Not walk allowed participants to follow either a 5km or 10km walk in memory of loved ones who were treated at the hospice in the village.

The walkers, many of them with dogs and some in special T-shirts, congregated in the grounds of Joyce Grove before being led off by Mr Toad. They walked through woodland around Highmoor and Nuffield before returning to the hospice about two hours later.

Jean Simmons, who took part with five friends, said: “Sue Ryder does an amazing job and we are all walking for someone special.”

Fellow walker Susan Crowe added: “You never hear anybody say anything bad about this place.”

Clare Sherriff, from Medmenham, who took part with her dog Vandal, was walking in memory of her mother Yvonne Johnston, who died in 2012.

She said: “My mother lived in Henley and was cared for here so I’m walking for her and how she fought.

“It’s the Rolls-Royce of care, it’s quite extraordinary. When she came here my mother asked if she had gone to heaven.”

Beaver leader Kaeti Martin, from Shiplake, walked with her children Jessica and Joshua, their friend Harrison Carpenter-Buckett and village scout leader Debs Boughey. She said: “Jessica can get her hike badge and the boys are in the beavers too.” Mrs Martin said they were walking in memory of their friend Tony Stevens, from Dunsden Green, who died at the hospice.

Mr Stevens, who ran the Jet garage in Reading Road, Henley, for 17 years, was diagnosed with renal cell cancer in 2015 and was given six months to live. He passed away on New Year’s Eve.

He was so impressed with the care at Joyce Grove and the people who work there that he shared his story with the Henley Standard shortly before his death to encourage readers to support the hospice’s Christmas appeal.

Mrs Martin said: “It is a fantastic place and we just want to support it.” Mrs Boughey added: “If you are going to lose someone it’s always hard but having somewhere like this to come does make it easier. They are so amazing.”

After the walk, hot food and drink was served and there was a raffle and tombola. Walkers could also write a note on a Forget-Me-Not card which was attached to a special memorial tree.

The walk raised more than £5,500. Gemma Wise, senior hospice -, said: “A huge thank-you to all our supporters who took part without whose help we simply wouldn’t be able to help the people who need us, or carry on providing and developing the services that so many depend on. It was a fantastic turnout.”

Next year’s walk will be held on Sunday, September 16.