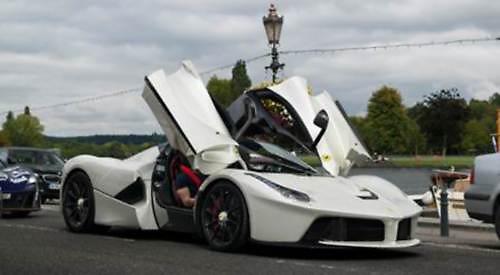 Supercars from across Europe came to Henley on Saturday, writes Ben Stodolnic. They were taking part in an event called “Cars and Coffee”, which began near Wembley Stadium in London before some were driven to Hambleden Sports and Social Club.

The vehicles included a Ferrari LaFerrari, a Lamborghini Huracán and a Ferrari 458 Speciale Aperta from Belgium.

YouTube car blogger Shmee150, who has more than a million subscribers, came in his blue Aston Martin GT8 to film the event.

The gathering was hosted by Topaz Detailing, a company which applies paint protection film to supercars. Afterwards, the cars were driven through Henley on their way back into London.

They held up traffic outside the Red Lion Hotel in Thames Side for around three minutes with the drivers revving their engines.

The LaFerrari lifted its butterfly doors as it was being filmed for a promotional video from the boot of a BMW X6.