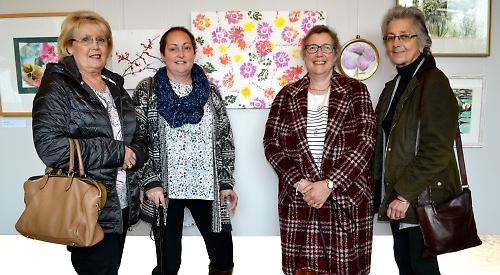 AN exhibition of art by patients of the Sue Ryder hospice at Nettlebed has opened at the new community gallery at the River & Rowing Museum in Henley.

It features paintings, drawings and collages by more than a dozen people who use the charity’s day hospice service regularly. Some were created individually while others are group efforts.

The display is called “Holidays” and features images of beaches and landscapes in Britain and abroad as well as scenes from nature.

Many of the pieces can be bid for in a silent auction with all the proceeds going to the charity.

Many of the artists attended a reception to launch the exhibition on Friday.

Organiser Margaret Thomas, a fund-raiser for the hospice, said: “We have some absolutely lovely paintings and drawings which have been created with a huge amount of love and effort.

“The most important thing isn’t the quality of the art but the enjoyment that the patients get from being with others in an environment where they can relax, be themselves and have fun.

“We chose holidays as a theme because winter’s coming up and we all know it can be quite gloomy. I felt it would be lovely to have something bright and colourful to represent us because ultimately we’re all about living, not dying.

“This lets the patients switch off from their worries, relax and do something they may never have done before, or at least not since they were at school. It gives them a sense that there’s always a chance for a new beginning.

“In some cases they’ve taken time to reflect on their holidays by the sea as children and create something that represents their memories.” Jo Langley, from Peppard, contributed two paintings called From Sonning Bridge and On The Cornish Coast and contributed towards a group work featuring prints of flowers and leaves from the hospice grounds.

She said: “I can’t believe that something I’ve created is on display in a gallery as I had never painted before. It’s wonderful.

“I’ve made some great friends through painting at the hospice and we’ve become pretty close. We really enjoy it and have a good laugh. I think it’s a great activity for the mind and helps you think less about your problems.”

Paula Humm, from Sonning Common, who also helped with the group print, said: “We started the art group because some of us were good painters and it was a chance to band together.

“It’s a great alternative to just sitting around talking about how you feel and a good team-building exercise for helping newcomers bond with the rest of the group.” Stephen Birch, an architect from Shiplake, contributed a painting of the Victorian hospice building.

He said: “It’s the first time I’ve painted since I was a teenager though I have lots of experience of drawing because of my professional background.

“It’s a very good activity. I was initially quite reluctant to get involved because I didn’t want to go to a hospice but I was persuaded to give it a go and soon realised that it’s a marvellous thing.

“It’s a great way to share your life with others in a similar position and activities such as this are highly therapeutic.

“I was completely absorbed when I painted this and there wasn’t room in my mind to think about anything else.”

Natalie Patel, the museum’s head of collections and exhibitions, said: “We’re so glad to be working with Sue Ryder, which plays such a valuable role in the community.

“This is an uplifting exhibition because there’s so much bright colour and vibrancy in the paintings and drawings. A lot of life and laughter has gone into creating them.”

“Holidays”, which is free to enter with a standard museum admission ticket, runs until November 19.