Roll, carve or paint them... anything goes at organic pumpkin festival 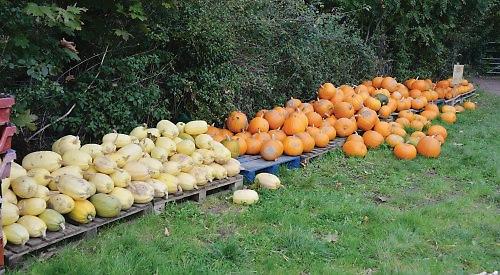 SCORES of families attended a squash and pumpkin festival at the Hardwick estate in Whitchurch.

The event has been hosted by organic farmers Iain and Tamara Tolhurst every year since 2013.

New attractions this year included a pumpkin-rolling competition and a stall where children could paint a pumpkin and take it home.

There was also an autumn-themed fashion parade for children in which they dressed in seasonal shades and were led around the grounds by the couple’s daughter Rose, who was dressed in a fairy costume.

Families could sit on the grass enjoying picnics and barbecued corn cobs and there was a farmers’ market, nature-themed craft activities, a carved pumpkin display and home-made vegetarian food stalls.

An acoustic band featuring a banjo player performed and there were storytelling sessions and an appearance by children’s entertainer Bertie Slippers.

Mrs Tolhurst said: “It was a beautiful day and everyone who came really enjoyed themselves.

“It’s always free for children because we want to encourage families to attend.

“We had no idea that the festival would be so successful when we launched it but it has become very popular.

“It coincides with the harvest season and I think families enjoy being a part of that.

“We’re definitely planning to hold it again next year and would also like to organise a vegan food festival over the summer as everything we do here is vegan.”