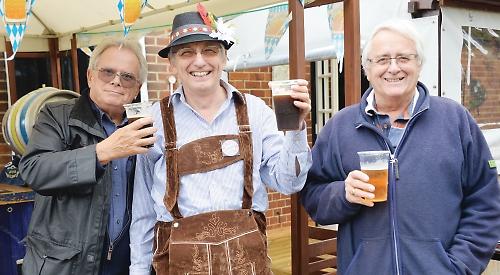 Hundreds of people attended the event in an outdoor marquee and sat at long benches and trestle tables like those used at the annual festivities in Munich.

They enjoyed German beers, a hog roast and other national treats such as bratwurst and sauerkraut and a traditional “oompah” band performed.

A raffle raised £300 for Spinal Research. Giles Langford, who runs the pub with his partner Nina Taraborrelli, chose the charity as his mother is paralysed from the chest down as the result of a road accident.

The couple took over the Sun, which is owned by businessman Richard Hazell, a year ago. Both are trained chefs and Mr Langford, 35, who has worked at restaurants owned by Gary Rhodes and Gordon Ramsay, was previously head chef at Coppa Club in Sonning.

The Oktoberfest celebration, which they organised in partnership with the West Berkshire Brewery, was their first big function.

Mr Langford said: “Oddly enough, we actually came up with the idea from our time living in Dubai, where there are lot of places that celebrate it.

“We wanted to make it a family-friendly event rather than just having a big free-for-all and I think it went well.

“Everyone asked if we planned to do it again next year and we certainly intend to. Hopefully we can make things like the decorations even better next time.”