Residents and visitors urged to keep village tidy after tidy-up 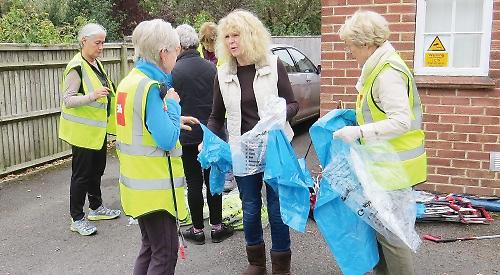 RESIDENTS and visitors to Goring have been urged to keep the streets tidier after volunteers filled about 25 bags with rubbish during a village sweep.

More than 20 people took part in the operation, which started and finished at the parish council’s offices in Red Cross Road on Saturday.

They worked in teams and were issued with high-visibility vests, litter-pickers and bags by South Oxfordshire waste contractor Biffa.

The volunteers tidied High Street and surrounding roads as well as footpaths, hedgerows, green spaces and the station car park, off Gatehampton Road. Afterwards, they were rewarded with tea and cakes.

The rubbish collected included a large amount of debris from road accidents, such as fragments of car bumpers and a side mirror.

A large number of cigarette butts was collected near the Catherine Wheel while at the Wheel Orchard car park, off Station Road, there was a large number of food wrappers and drinks bottles. As much waste as possible was sent off to be recycled while non-recyclable items were sent to landfill.

Organiser Maureen Whitcher, of Gatehampton Road, said: “Volunteers who come for the first time were shocked at the amount of litter. If some businesses supplied containers for the hundreds of cigarette ends discarded each week, it would help reduce this problem.

“The station car park, the Thames towpath and roads leading out of the village are also dumping grounds for cans, bottles, cartons and food wrappers. The litter louts do not even consider taking their rubbish home with them and drivers regularly clean out their vehicles as they leave the village. It is a growing menace.”

Adrian Turner, of Nuns Acre, who took part with his wife Sara, said: “It’s great that people are willing to take part but it’s not nice to think that it will soon become dirty again. It doesn’t give the best impression of the village and it doesn’t help that the bins are often overflowing. They need to be emptied more often.”

Biffa has already increased the frequency of collections after complaints.