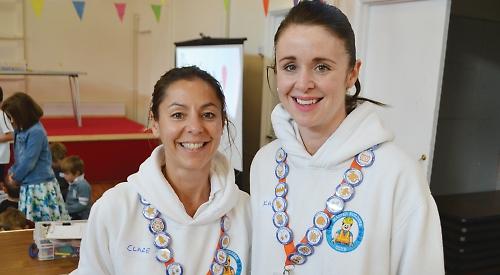 Neighbours Clare Wright and Kate Winter, of Wood Lane, Kidmore End, came up with the idea for the Master Builders Club after seeing how much their own children loved the toy bricks.

They are now fully booked at weekends until the New Year and plan to continue expanding by selling merchandise and offering their events more widely. Thirty-five youngsters attended the anniversary party, which took place Sonning Common village hall.

Each child received cupcakes and Lego figures in return.

Mrs Winter said: “It was a huge success and the boys and girls helped us celebrate what has been an incredible year.

“Some of these children have been to every workshop that we have run and some were new to the club. We are very lucky to have lots of repeat customers.”

Mrs Wright added: “The main aim of the party was to celebrate a fantastic year and to spoil the children that have supported us so well.

“Everyone had an amazing time and based on the feedback we will definitely repeat it. Our first year has been phenomenal.”

The next Master Builders Clubs will take place at Trinity Hall in Harpsden Road, Henley, tomorrow (Saturday) from 1pm to 3pm and at Kidmore End Memorial Hall in Reades Lane, Sonning Common, on November 4 from 1.30pm to 3.30pm.