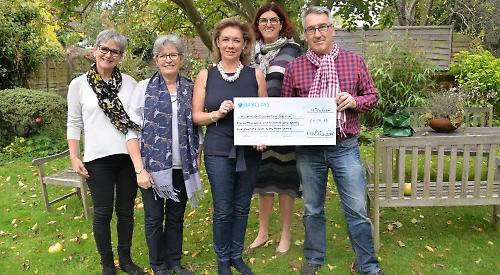 A MUSIC festival held in a couple’s garden raised more than £11,000 for charity.

“G in the Dark” took place at the home of Nicki and Cliff Williams-Gray in Russells Water in August.

Five bands performed at the invitation-only event which was attended by 400 people. It was in aid of Riverside Counselling Service, which offers support to people aged 12 and over in Henley and the surrounding area.

Mrs Williams-Gray, who is a trustee at the charity, and her husband organised the event with Nettlebed GP Dr Lisa Silver and her husband Tim Brassey. The money was raised by donations from guests and there was a contribution from Microsoft in Reading, where Mr Brassey is an accounts strategist.

The organisers presented a cheque to the charity at its base in Northfield End, Henley, on Monday.

Teresa Johnstone, who chairs the charity’s trustees, said: “We are absolutely delighted and very grateful for all the hard work they put in. The funds will be used to provide counselling for young people and adults. We are looking to expand our services to meet the growing need.”

Mrs Williams-Gray said the event would be back next year “by popular demand”.