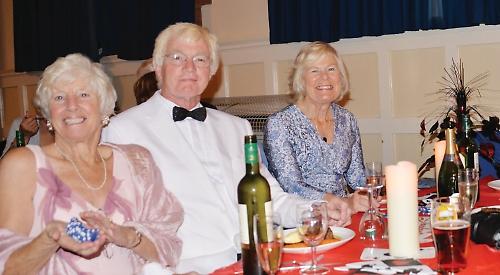 The event, which was organised by Crazies Hill and Cockpole Green Residents’ Association, took place at the village hall on October 7.

More than 40 people attended and each was given a drink and £100 worth of casino chips on arrival. Real croupiers manned the tables and explained the rules to beginners.

There was music by Rat Pack-era singers such as Frank Sinatra and Dean Martin, which was played by committee member Graham Tweddle throughout the evening.

Guests were served a two-course meal of lamb, which was provided by the Horns pub in the village, and a chocolate dessert made by committee member Laura Lord.

Residents played on the tables until 11pm, when those with remaining chips counted up their money to see if they had won a prize.

Bottles of wine were then presented to the man and woman with the most value in chips, Seb Reynolds and Jan Siburn.

The event was sponsored by broadband provider Gigaclear, which is currently installing superfast cables in the village. This meant the association could reduce the price of a ticket to £10.

Association chairman Dave Smith said: “Everyone agreed the food was delicious and once supper was over guests returned to the gaming tables where they obviously enjoyed themselves as they were still going strong when we had to call time.

“Many thanks to all the other association committee members, David Noyes, Cath Reynolds, Phil Davies, Laura Lord, Sue Robinson, Richard Jones and Graham Tweddle a who helped make the evening such a success.”