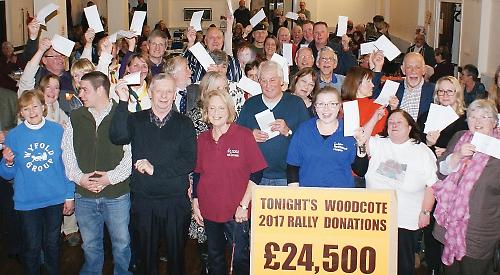 THIS year’s Woodcote Rally raised £24,500 for 40 charities and community groups.

This is the highest total that the steam and vintage vehicle rally has raised since its 50th anniversary in 2013, when it made a record £31,800.

The proceeds from the event, which took place over two days in July, were handed out at a ceremony at the village hall on Saturday.

Organisers say its success was down to good weather and a decision to concentrate the event on a smaller site than previously.

The biggest donation of £2,000 went to Woodcote Parish Council for the refurbishment of the village hall’s function room, which is used for council meetings as well as by the community.

The council has applied for a £6,000 grant from South Oxfordshire District Council and has pledged a further £6,000 from its own coffers in order to redecorate the room and install new furniture.

A total of £1,250 went to Wallingford’s army cadets and £1,000 each to Woodcote Cricket Club, Thames Valley Tractor Club, Goring Heath scouts and guides and the Cabin Pre-School in Woodcote. Woodcote Pre-School Group received £800 towards sensory toys while £750 went to Stoke Row scouts, the Woodcote and Goring surgeries and the Thames Valley Air Ambulance and £650 to the Sue Ryder hospice in Nettlebed.

A total of £600 went to Langtree School in Woodcote for student-led community projects, Woodcote Badminton Club and the Griffiths Higgs Educational Charity.

The RG8 Badminton Club, the Firefighters’ Charity (Oxfordshire) and Checkendon brownies each received £550.

Woodcote/Stoke Row Football Club was given £500 towards new goalposts and Our Woodcote Library received the same amount for new books and children’s activities.

Another £500 went to Friends of Woodcote Primary School to refurbish an outdoor play area and the village green committee received the same amount towards new fencing on Folly Field.

Donations of £300 were made to Wyfold Riding for the Disabled, which is purchasing an electric bicycle, Checkendon and District Aid in Sickness, Woodcote Conservation Group, the Mowforth House sheltered housing complex in Woodcote, Checkendon adventure playground, Hearing Dogs for Deaf People and Guide Dogs for the Blind.

The rally has now raised a total of £481,000 since it was launched by the Woodcote Charitable Association in 1964. It has been held annually ever since except 2012.

Almost 600 classic and vintage vehicles were exhibited this year and there were working displays, live music, fairground rides and other attractions.

Awards for the best exhibits were presented as follows: