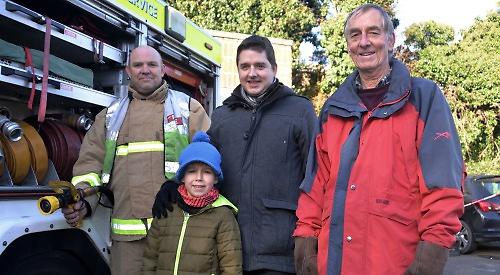 THE fire station in Wargrave is on course to stay open after recruiting four new firefighters.

The retained station in Victoria Road is at risk of closure unless it can increase the availability of its crew.

This follows public consultation on plans by the Royal Berkshire Fire Authority to cut costs. Residents across the county were asked to state their preference from seven possible measures to save £1.4 million.

The most popular proposal was to close Wargrave and Pangbourne fire stations and abolish the retained support unit and remotely manage three other stations.

But following a campaign by residents and parish and borough councillors, the authority agreed to allow the Wargrave station to stay open for another 12 months, beginning in October, during which it must increase the availability of its crew to 60 per cent.

Mr Harling, 44, who lives within two minutes of the station, has completed training in ground safety and traffic collisions and has already been on his first call-out.

Fellow recruits Jon Pipe and Mat Helsby will be taking their ground safety and water rescue training this month, while Russel Thomas, a fully-qualified firefighter from Maidenhead fire station, will provide cover at Wargrave on his days off.

Mr Helsby lives in Wargrave with his partner Hayley Wilson and their children, while Mr Pipe runs a family lawn care business in Caversham.

Both men are currently undertaking a two-week training course at Reading fire station, after which they will be available for call-outs. Retained support officer Jon Murby said crew availability had already gone up from 2.6 per cent at its lowest to 18 per cent currently.

However, more recruits would be needed to reach the required 60 per cent by next October. A “have a go” event, designed to encourage potential recruits, will be held at the station on Saturday, February 17.

This follows an identical event held last month which was attended by more than 250 people.

The crew gave two demonstrations of how they deal with road collisions, including cutting a car open with specialist machinery to “rescue” people.

There was also a community fire safety stand showing the effects of not wearing seatbelts and a first aid training area where guests could learn CPR and practise on a dummy called Annie.

Children could dress up as firefighters and crawl through an obstacle course and some took turns sitting in a fire engine. A shop sold fire service-themed gifts and toys, helping to raise £250 for the Fire Fighters Charity.

Visitors could also try out a range of physical tests to see if they would be suitable to sign up. These included assembling pieces of equipment, working in a confined space and lifting and lowering the ladder correctly.

Mr Murby said two people tried the entry test on the day and another four took away information on how to apply.

He said: “The crew had a very enjoyable day and it was really nice to meet the local people and their families. Hopefully, this raised the profile of the station to help with the next event.”

Anyone interested in joining should live or work within seven minutes of the station.

The service is particularly looking for people to cover between 9am and 5pm Monday to Friday as those are the times when crewing is currently lowest. For more information, visit www.rbfrs.co.uk