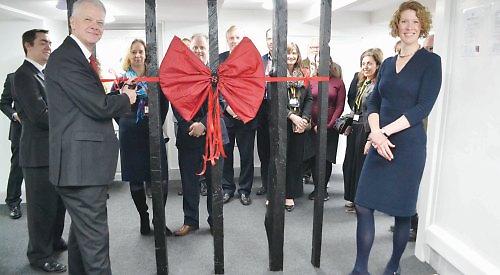 A NEW learning hub has been officially opened at Highdown School and Sixth Form College in Emmer Green.

The facility at the school’s manor house comprises conference rooms, tables and projector screens and replaces attics which were previously used for storage.

The hub will be used for professional learning and teacher training, with student teachers visiting from across the South.

The rooms can be used to mock up lessons and practise techniques as well as for meetings.

The hub was opened by Sir David Bell, vice-chancellor of the University of Reading, on Thursday last week.

He cut a large ribbon on a bow made by the school’s design department and a plaque was also installed on the wall.

Sir David was joined by representatives from Reading and Oxford universities and Highdown’s partner primary schools.

The hub, which was funded by the Education Skills Funding Agency, was built over the summer holidays.

It was first proposed by headteacher Rachel Cave and her deputy Matt Grantham when they joined the school four years ago.

Mrs Cave said: “Professional learning is very important here. When Matt and I started here this area was a little bit unloved.

“Due to things like the fire escape across the roof it wasn’t something that could be used as a classroom.

“We also had to spend money on shoring it up and making it watertight so we had to wait another year.” Mr Grantham said: “It was just storage and empty space and when Rachel and I joined we had an absolute focus on professional learning and teacher training.

“We had a successful bid to convert the space into this amazing one.

“We’ve been using it for about four weeks now. Teachers come from as far as Brighton as well as our partners in Reading, Oxford and London.”

Sir David said: “I can legitimately say I have skin in the game here as I began my working life as a primary school teacher before going on to local authorities, Her Majesty’s Chief Inspector of Schools inspector and positions in the Department for Education

“At all those levels I was interested in finding the best ways to promote professional development and I commend the school for such a great initiative.”