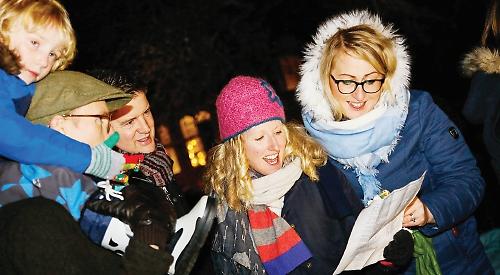 The village shops stayed open until 8.30pm and the lights of the 20ft Christmas tree in Rectory Gardens were switched on.

The switch-on ceremony was taking place for the first time since 2015 as Richard and Dawn Roberts, who run the Goring Gap Business Network, were unavailable last year.

She also sang Away In A Manger with her former singing pupil Imogen Kingsland, 11, whose parents Stephanie and Phil run Pierreponts café in High Street.

Mrs Kingsland, whose older daughter Clara sang carols with Goring brownies later on, said: “We were really proud of Imogen and impressed that she had the courage to stand up in front of all those people and sing. She really enjoyed it and I think it was a magical evening.”

The spectators sang along to carols performed by a choir of about 15 singers, mostly drawn from the Goring Chamber Choir, led by resident Frances Thompson.

Mrs Roberts then switched on the lights on the tree, which was donated by the Yattendon Estate, and a bucket collection was taken for the Sue Ryder hospice at Nettlebed.

“It was a great evening and it was lovely to have a proper switch-on ceremony again,” said Mrs Roberts.

“I really don’t sing very often these days so it took time to warm up my voice and I was hoarse for some time afterwards but I enjoyed it.

“As a whole, the evening is a great advertisement for Goring. There’s something for everyone as it makes people who live here happy while showing the village at its best and hopefully attracting plenty of people from outside. The streets were absolutely packed.”

There were 13 market stalls at The Arcade, off High Street, selling a range of goods including handmade crafts, jewellery and dog treats and toys while musicians played Christmas songs in the street. Staff from Goring Village Butchers sold pulled pork rolls, the Chef King restaurant set out a Chinese buffet and Goring Free Church offered hot chocolate with marshmallows and organised children’s games.

Goring Veterinary Centre invited visitors in to meet some animals.

The Goring Chocolate Café hosted the grotto and staff dressed as elves. About 200 children visited, the first 150 of whom received a present of a small torch.

Vivienne Lee, who runs the café and helped to organise the markets, said: “It was an amazing night with a real buzz. The streets were swarming with people. Santa gave away all his presents and we were selling many burgers, hot dogs and hot drinks.

“People loved coming into the warm and they were sharing tables with each other. There was a great community spirit.”

Owner Jeanne Hunter, who also helped run the event, said: “It was a wonderful evening and the children enjoyed the glowstick trail, which made the streets very colourful and also kept them safe as we couldn’t close the road for the night.

“The atmosphere is always good and there’s a very close-knit community feel. It’s a great way to kick off the Christmas celebrations and bring people into the shops at the same time.”

Phoebe Hayter, front of house manager at the Goring Grocer, said: “We were really busy just handing out home-made goods. There were lots of people coming in and there was a very Christmassy atmosphere all evening.”

Shaun McNamee, owner of Swift Office Stuff in High Street, said: “It was a very, very busy night with lots of people coming in to browse as we handed out sweets.”