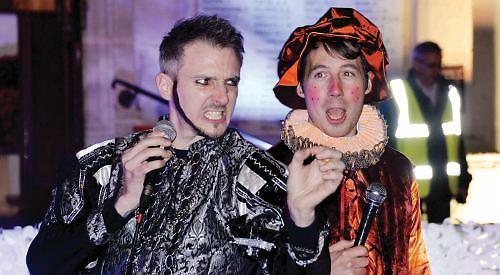 THOUSANDS of shoppers packed the streets of Henley for the town’s Christmas festival.

Streets in the town centre were closed to traffic on Friday night as market stalls and fairground rides were set up for visitors to enjoy while shops stayed open late.

Schools, charities and community groups had stands and a choir made up of pupils from Gillotts School walked around singing carols while collecting money in buckets for charity.

The evening began with a torchlit procession along the River Thames from the River & Rowing Museum in Mill Meadows to the Kenton Theatre in New Street.

More than 100 children and their parents walked along the towpath, Thames Side and Riverside carrying home-made lanterns.

They were led by Mayor Kellie Hinton, who was wearing her mayoral robes and chain accompanied by a Santa hat, and her escort Councillor David Eggleton, who was dressed as a Cavalier from the Civil War.

The participants were served refreshments by Farrow & Ball and the Spice Merchant restaurant, both in Thames Side, and Hotel du Vin in New Street.

Nyree Brunger, community champion for the Tesco supermarket off Reading Road, then guided them across the road with a giant “lollipop” while dressed as one of Santa’s elves.

At the theatre, children could visit Father Christmas in his grotto, which was sponsored by Invesco Perpetual and Tesco, while the café was serving mulled wine and members of the Henley Amateur Operatic and Dramatic Society sang carols.

Staff from the museum offered free face-painting and staff from the Regal Picturehouse cinema in Boroma Way entertained youngsters while dressed as characters from Star Wars.

James Clifford and Dan Dawes, who play the Sheriff of Nottingham and Guy in the Kenton’s forthcoming pantomime Robin Hood, performed a short comedy routine on the main stage to promote the show. They later repeated their performance in front of the town hall steps.

Tom Ryan, the theatre’s programming manager, said: “We were really delighted with how it went. People appreciated being able to wait indoors for Santa instead of queuing outside in the cold.

“We also opened earlier than usual so there was more of a steady stream instead of one big rush, although it did get pretty manic when the lantern parade arrived. A lot of parents assumed they’d have to pay but we kept it free because it can be a very expensive evening when you have children. It was very much in keeping with the Christmas spirit.”

Meanwhile, a funfair including a ferris wheel, helter skelter, roundabouts and candy floss stalls was set up in Hart Street with a few additional rides in Duke Street.

The 25 stallholders included the Spice Merchant and the Catherine Wheel pub in Hart Street. Pubs and restaurants in Market Place including the Three Tuns, the Argyll and Loch Fyne sold festive treats outside their premises while butcher Gabriel Machin ran a barbecue with help from celebrity chef Antony Worrall Thompson, who owns the Greyhound in Gallowstree Common.

There were performances on a stage at the town hall steps including a half-hour set by horn players from the Henley Symphony Orchestra, which was the opening event of this year’s Henley Living Advent Calendar.

Singers Maya Rees and Amy Penrose played cover versions of classic pop and rock songs including Half the World Away by Oasis, Your Song by Elton John and Holocene by Bon Iver.

Children from Stephanie’s Stage Stop Dancers and Sacred Heart Primary School danced several routines, including a number set to All I Want For Christmas by Mariah Carey.

At 7pm the town’s Christmas tree was lit up by Lottie Baker, 11, a pupil at Valley Road Primary School, who won the Mayor’s Christmas card design competition.

Councillor Stefan Gawrysiak, who compered the evening with the Mayor, introduced Lottie and led the countdown before she pressed the “button” to switch on the lights on the 30ft Nordmann fir in Market Place.

Afterwards, the crowd sang carols including Silent Night, Ding-Dong Merrily On High and Away In A Manger accompanied by the Woodley Concert Band and the Gillotts choir.

Their set included California Dreamin’ by The Mamas and The Papas and She’s Electric by Oasis and finished with an encore of Paint It Black by the Rolling Stones.

Miss Moberley, who organised the performances, said: “I thought the acts really shone and I was very, very happy with how it all went. We had some big crowds and there was a real variety of performances which created a wonderful atmosphere.

“I grew up in Henley and the festival has always been a wonderful event, although I didn’t get much of a chance to see it because I was so busy making sure everything ran smoothly. It brings the community together.”

Paula Price-Davies, who is Henley Town Council’s events manager and the Kenton’s general manager, said: “We’ve had lots of really positive feedback from residents and visitors. There were healthy queues for the funfair rides and Santa’s grotto was absolutely heaving.

“The new ‘zoning’ arrangement for the market stalls worked well and we were very careful not to put stalls outside businesses which didn’t want it.

“The food court seemed to be doing a roaring trade and we had a vast selection of music and dance performances from people of all ages.

“There was a massive clean-up operation afterwards and I’d like to thank the town council staff, including our parks services team, and the councillors who took part in that.

“Several traders told me it was immaculate the next morning and you’d never have known the festival even happened.”

Councillor Hinton said: “It was an absolutely magical evening. My only worry was how I would be in so many different places at once, which I managed although I was incredibly busy!

“Although the festival is there to promote local business, the most important thing is to make families happy and it definitely achieved that. Everywhere I went, people were saying how lovely it was and what a great time they were having.

“There are still things we could learn — for example, the litter started piling up in Bell Street towards the end of the night and we could have done with more bins.

However, by and large, it went very well and you can always find ways to improve.”