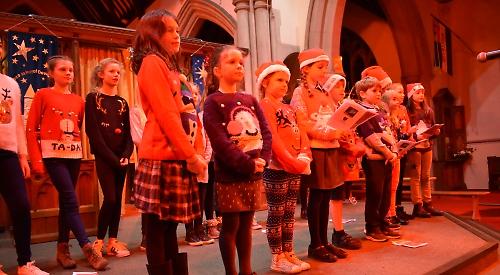 A CHOIR from Trinity Primary School sang to dozens of guests on the 18th night of the Henley Living Advent Calendar.

They were introduced by Henley Mayor Kellie Hinton, whose seven-year-old daughter Hallie was part of the choir, and sang traditional carols including O, Come All Ye Faithful, Hark the Herald Angels Sing and Once in Royal David’s City.

The audience was encouraged to sing along and were given song sheets to help with lesser known compositions including It Was on a Starry Night, Nazareth and Bells Ring Out.

The choir also performed a second rendition of Nazareth as an encore, before helping Cllr Hinton and vicar Rev Duncan Carter draw the raffle, with prizes including wine, bath bombs and gift sets.

Teacher Peter Moody, who led the choir, said: “They have been so excited. This is one of many things we have been doing over Christmas and they are absolutely buzzing.

“They rose to the occasion, young people don’t get fazed. It’s me that gets the nerves!”

Richard Rodway, who chairs the calendar, added: “There’s nothing better than cute kids in Christmas jumpers singing Christmas songs in a church, it sums up Christmas.

“I talked at the start of the month about people taking ownership of nights and this was one of the first to do so.

“The church worked with the school and sorted it all themselves, I just turned up.”

The night was raising money for the school, which along with the other Henley state primaries is one of Cllr Hinton’s mayoral charities this year.

Tomorrow’s performance (Tuesday) will be held at the Christ Church Centre in Reading Road.