Calendar coming to a climax 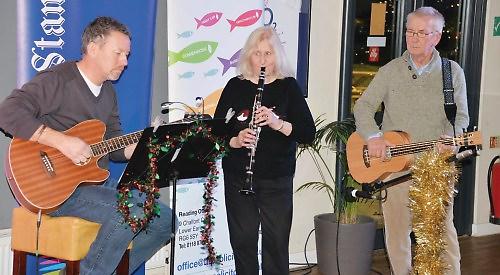 THE Henley Living Advent Calendar comes to a climax on Christmas Eve after more than three weeks of live performances.

The 24th and final show will take place outside St Mary’s Church in Hart Street on Sunday.

Organiser Richard Rodway is hoping to match the record £5,200 raised by the charity initiative last year.

He said: “It has been another really great week with some diverse but fab performances.

“We’re in the home straight now and we will end with a rousing finale, so do come and see.”

Every evening in December, different venues have hosted a
30-minute performance by a variety of acts, including musicians, singers and dancers.

Each show is dedicated to a charity or a good cause, whose volunteers hold bucket collections.

On Wednesday last week, jazz group WOT Jammers, from Whitchurch, performed to a packed audience at the rear bar of Magoo’s in Hart Street. Free biryani and vegetable samosas were provided by the Cook Curry Club.

They then played instrumentals in a variety of styles including bossa nova, “cool” jazz and ballads before closing with a lively rearrangement of White Christmas.

Proceeds from the evening went to Bishopswood Special School in Sonning Common.

On the following night, children from three primary schools in the Henley area gave poetry, drama and literature readings in the garden of estate agent Simmons & Son in Bell Street.

Pupils from Sacred Heart and Trinity primary in Henley were joined by youngsters from Crazies Hill school. The garden was transformed into a grotto with festive lights and a stage on the terrace and visitors were treated to mince pies and mulled wine.

The performance, which included a passage from Fantastic Mr Fox by Roald Dahl, ended with a surprise visit from Father Christmas who talked to the children. The show was in aid of Henley Music School.

On Friday, the Congo Frog Boudoir Band played a collection of festive and classic songs to a crowd of more than 50 people in the main room of the town hall.

Mr Rodway led a countdown from five before the band emerged from a door on the stage.

The seven musicians included Martyn “Eek” Cooper on vocals and Mike Holland on the sousaphone, both of whom also performed last year.

They opened with Dominick the Donkey and got the crowd to join in, while Mr Cooper’s son Eddie, 10, donned a donkey mask and danced around the hall.

This was followed by Rockin’ Around the Christmas Tree, Last Christmas by Wham!, Merry Christmas Everyone by Shakin’ Stevens, YMCA by the Village People and Slade’s Merry Xmas Everybody. The band then performed an encore of Dominick the Donkey. Mr Cooper, who also performed on the second night with the Hairy Molly Barn Dance and Ceilidh Band, told the crowd: “We’re delighted to be taking part in the Living Advent again. Thank you so much for coming out.”

After the performance, Mr Rodway said: “That was fantastic. It was about time these guys had a proper stage and they showed what they could do with it.

“It was just non-stop fun and you could see the reaction from the audience. You always know you’re getting something quirky and fun with Martyn.”

The evening was in aid of the charity Riverside Counselling, which offers support to people aged 12 and over in Henley and the surrounding area.

On Saturday, Anne and the Doughboys played to a crowd of about 150 people at Corner 81 at Henley Rugby Club. The band featured Anne Baker on clarinet and Mike Lawlor on bass, both from Lawlor’s bakery, and Andy Crook on guitar.

Their set included White Christmas, Rockin’ Around the Christmas Tree, Good King Wenceslas, Let it Be, Somewhere Over the Rainbow and Streets of London before finishing with Silent Night with which the crowd sang along.

The evening was raising money for the Henley branch of Parkinson’s UK.

On Sunday, singer Bryn Haworth performed a selection of festive classics to an audience of about 75 people at the d:two centre in Market Place.

Mayor Kellie Hinton welcomed the audience before handing over to Sue Prior, funding co-ordinator and family support worker at the Nomad, which is based at the centre. She spoke about the work of the youth and community project.

Roger Cole, pastor at the Henley Baptist Church, introduced the night’s performer. He also presided over the raffle.

On Monday, a choir from Trinity Primary School wore Christmas jumpers and sang to dozens of guests at Holy Trinity Church.

They were introduced by the Mayor, whose seven-year-old daughter Hallie was part of the choir.

The children sang traditional carols including O, Come All Ye Faithful, Hark! the Herald Angels Sing and Once in Royal David’s City.

The audience was encouraged to sing along and given song sheets to help with lesser known compositions such as It Was on a Starry Night, Nazareth and Bells Ring Out. The choir performed a second rendition of Nazareth as an encore before helping Cllr Hinton and Holy Trinity vicar Rev Duncan Carter draw the raffle.

Teacher Peter Moody, who led the choir, said: “The children rose to the occasion. Young people don’t get fazed — it’s me that gets the nerves!”

On Tuesday, the Henley Youth Festival, which celebrates its 25th year in 2018, took over Christ Church in Reading Road.

More than 100 people witnessed a drum solo, a dance piece and songs from the Suzuki violin group, which included Carol of the Bells and a solo rendition  of The Snowman theme.

The performance ended with pupils from Badgemore Primary School singing traditional and contemporary classics including Hallelujah and We Wish You A Merry Christmas.

Afterwards the audience was served mince pies and other baked treats and mulled wine courtesy of the hosts and the evening’s sponsor, Manning UK Insurance.

Tonight’s (Friday’s) performance will take place at the town hall and tomorrow’s (Saturday’s) is in Falaise square.