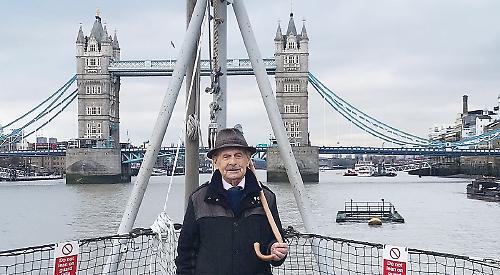 A ROYAL Navy veteran enjoyed a day out aboard the ship on which he once served.

George Ward, 90, was given a guided tour of the HMS Belfast thanks to the armed forces charity SSAFA (formerly known as the Soldiers, Sailors, Airmen and Families Association), which was supporting him as he recovered from a period of illhealth.

Mr Ward, of Nelson Road, Caversham, broke his hip about four months ago and had also undergone surgery for a faulty valve in one of his arteries.

Karen Scott, a representative of SSAFA’s Berkshire branch, was visiting him at home and learned about his service history so she offered to take him to London, where the ship is moored, once he had recovered.

Mr Ward, who was born in London, joined the Navy at the age of 17 and served for 14 years, mostly as a gunner.

He served on HMS Belfast in the Far East during the late Forties and early Fifties.

The petty officer, who was nicknamed Sharky, operated one of the ship’s twin four-inch guns.

He and his crewmates maintained a peacekeeping presence in the aftermath of the Japanese surrender in 1945.

Mr Ward later served on HMS Delight, a destroyer which was involved in the Suez Crisis in Egypt, before leaving the Navy in the late Fifties.

HMS Belfast is now maintained as a tourist attraction by the Imperial War Museum and moored near London Bridge. Mr Ward said: “This was really special for me. It brought back a lot of memories. It was also a real milestone to be able to complete the trip because I’ve been so isolated since I broke my hip.

“I usually visit every two or three years and think it’s great that she’s in such good condition.

“I can see where I used to sleep and get my rum rations or shop at the NAAFI.

“I often end up talking to other people about what it was like or explaining different parts of the ship.

“I’ll hear children asking questions and their parents say, ‘I don’t know the answer but that man over there might’.

“I am lucky to have shared this trip and would encourage any other veterans to speak to SSAFA as it has given me a great deal of personal support.”