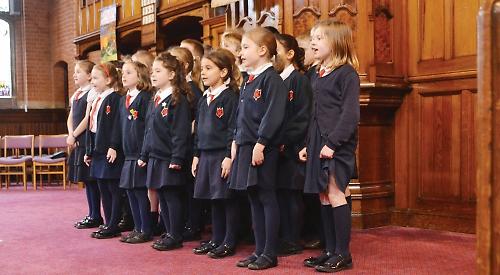 PUPILS from the four state primary schools in Henley performed alongside a professional a capella group at a concert, writes Jamie Presland.

Children from Sacred Heart, Valley Road, Badgemore and Trinity schools sang at the event at the Christ Church Centre.

They were joined by Apollo5, a London group fronted by Alex Haigh, who grew up in Henley, for two performances attended by teachers and parents.

Each school performed individually before coming together for a finale.

The songs included a rendition of piano tune Swinging Along, Steven Schwartz’s When You Believe from the film The Prince of Egypt and hits by Fleetwood Mac and Taylor Swift.

Pupils performed their own dance moves with some of the tunes. The performances were interspersed with numbers sung by Apollo5.

The concert, now in its fifth year, was sponsored by the Henley Educational Trust and was the culmination of a series of singing workshops held by Apollo5 in each school.

Colin Homent, who chairs the trust, said: “It’s fantastic to see the childen’s happy, smiling faces and they really enjoyed doing it. You couldn’t get me up on stage when I was at school but they love it and the schools want to keep doing it every year.”