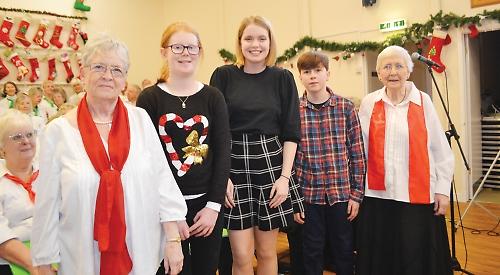 More than 60 members of the community choir took part in “A Christmas Cornucopia” at the village hall in Wood Lane.

The concert included more than 20 songs and included three solos by young musicians.

Abby Geddes, 15, sang All Through The Night and It’s Beginning to Look a Lot Like Christmas. Michael Varnes, 12, played guitar and sang Skinny Love by Bon Iver and Half the World Away by Oasis while Jennifer Ellis, also 12, played Ascot Gavotte a clarient solo from My Fair Lady.

Margaret Moola, who founded the choir with Elaine Williams, said: “The children performed beautifully and the audience were so responsive and congratulated them.

“The choir were brilliant too. Many people have said they noticed an improvement since their summer concert. They are now beginning to produce a proper choral sound.

“They have been developing and working on it for a long time now. The whole choir is really improving.”

• Nottakwire has sponsored guitarist David Jaggs to perform at the village hall on May 4 in aid of Sue Ryder. The choir’s annual summer fund-raiser will be on June 23.