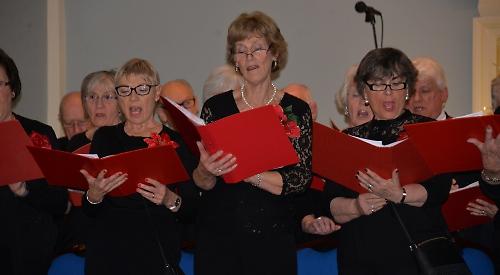 THE Phyllis Court Singers sang to more than one hundred people on the 22nd night of the Henley Living Advent Calendar.

They performed Christmas songs and carols as well as a mix of other songs for the performance at Henley town hall on Friday evening.

A member of the 20-strong choir gave the history of each song they performed.

For some of the festive numbers members of the audience joined in.

The group’s 30-minute set was let by its musical director James Church, who accompanied them on piano.

For the performance the men in the choir wore black suits with red bow ties while the women wore all black with red accessories.

Richard Rodway, chairman of the calendar, said the acoustics in the town hall made the choir sound fantastic.

He said: “I like the way we had the town hall set up tonight, it worked really well for the choir.

“They have been involved with the advent calendar before so they know what it’s all about and we know how great they are.

“It’s great to bring different parts of the community together and mobilise the Phyllis Court Singers by bringing them into the town centre.

“Philip Booth and Ronald McDonald House have made a massive effort tonight and that’s all added to the experience. I’m big on the experience when it comes to the calendar.”

The performance was held in partnership with estate agents Philip Booth Esq, based in Hart Street, and was in aid of Ronald McDonald House.

The charity provides free accommodation to families who have children being treated at hospitals in Oxford.

This year it has helped more than 600 families from Berkshire, Buckinghamshire and Oxfordshire.

Before the performance started staff from the estate agents gave out prosecco and squash for youngsters, while the charity gave out cakes.

Tonight’s performance (Saturday) will be held in Market Place, in partnership with Courtiers, a wealth management company based in Hart Street, and raising money for Alexander Devine Hospice.

For a full round-up, see next week’s Henley Standard.