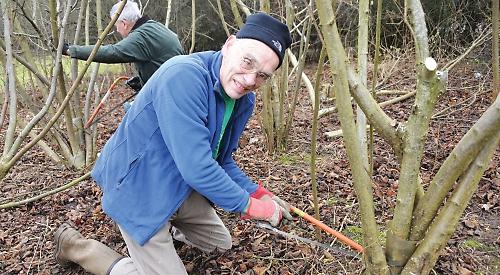 About 30 people made up a working group which coppiced trees at Millennium Green, off Peppard Road, on Saturday.

The trees were planted in 2008 to mark the 10th anniversary of the Green Gym, which encourages people to keep fit by working outdoors.

Afterwards the volunteers went for a buffet lunch and a slice of a special cake at the Bird in Hand pub.

Chairman Dr John Hasler, a former GP at the village health centre, said the Green Gym now had about 40 regular volunteers who worked at 24 sites across South Oxfordshire.

He said: “We’re lucky in that the work we do is incredibly varied. One week it could be putting fences up, the next week sowing trees, then planting hedging or clearing footpaths.

“We managed the work on Saturday extremely quickly because so many of our regulars were there.”

Green Gym was set up by Dr William Bird, who was then a GP at the health centre, to encourage people to take regular exercise by volunteering in local nature conservation projects.

It was the first group of its kind and there are now 130 across the country, including five in Oxfordshire.

Dr Hasler said: “People now realise how important exercise is. You can’t stop getting older but you can keep yourself fit. If you do more exercise then there is a good chance you won’t need a carer later.”

Gill Vaughan, who has volunteered since the start in 1998, said: “Veronica Reynolds, who was part of the scheme with Dr Bird, got me into it when I attended her step aerobics classes. She told me she was involved in this new conservation project and wondered if I wanted to join in.

“I came along and it turned out I was the only one apart from her and some girls from the British Trust for Conservation Volunteers.

“However, it has grown from there and I’ve got a lot out of it.

“When I was still working, it was lovely to go out on a Saturday and meet new people in the fresh air.

“It has kept me fit and healthy and I’ve learned a lot of new skills.”