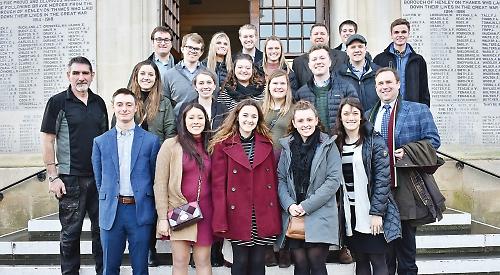 A GROUP of 18 American students were given a tour of Henley town hall.

They were shown around by town councillor David Eggleton, who is Mayor Kellie Hinton’s escort, and taught about its history before enjoying hot drinks and biscuits in the Mayor’s parlour.

The students saw the main hall and council chamber and also learned about the various works of art and the memorial plaques for residents who died in action during the First and Second World Wars.

The Americans were visiting for the day as part of their business studies and political science course at Augustana University in South Dakota.

They are spending a month in Britain to learn about the different levels of local and national government and the impact of the Brexit vote. After the tour, they explored the town and enjoyed dinner at the Hotel du Vin in New Street before returning to London by train.

Their professor Jason Harris said: “We wanted to give them a perspective from outside the capital and we’re grateful for the reception. They’ve enjoyed their visit tremendously and have learned a lot about English businesses and history.”

Councillor Eggleton, who regularly gives history tours of Henley while dressed as a 17th-century Cavalier, said: “I’ve learned a lot about the town in my three years as a councillor and it’s good to be able to pass that on.

“I enjoyed showing them around and hope they enjoyed it too.”