More stalls (and bins) at next Christmas festival 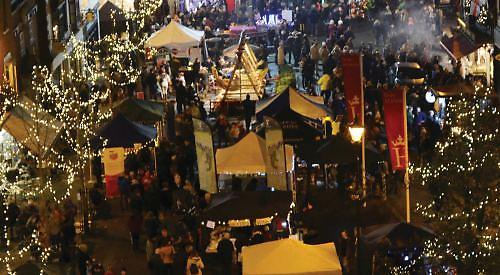 MORE trade stalls selling arts and crafts could be introduced at this year’s Henley Christmas Festival.

The town council is considering providing more attractions so that retailers in Duke Street and Friday Street can feel more included.

It is also considering providing more bins and closing town centre roads for longer after the event to give more time for the attractions and food vendors to pack.

The possible changes follows reaction to last year’s 27th annual festival, which was split into zones with food vendors in Bell Street and charity stalls in the Market Place.

Having more stalls more spread out was suggested at a Christmas events “wash-up” meeting at the town hall on Tuesday.

Mayor Kellie Hinton said: “In Market Place I thought it was quite busy but there was space to move around the tree so I think we got that right. We didn’t have enough stalls in Duke Street but the stalls we had were great.”

Laurence Morris, who owns Laurence Menswear in Duke Street, said: “It is a great night for the town and it brings people in.

“However, the lack of stalls in Duke Street affected footfall. There was one opposite me doing cheese and wine. I have been doing it for six years and it is a very successful night usually but this was an absolute disaster. I give out mulled wine but there wasn’t the traffic. The stalls need to be spread out.”

Mr Morris also complained that, for the second year in a row, the mini Christmas trees weren’t switched on on the opposite side of the road to his shop. Deputy Mayor Lorraine Hillier, who owns Hot Gossip in Friday Street, said: “Since it became more of a festival it has gone more into the middle of the town and less on the outside. There was nothing in Friday Street.”

But Paula Price-Davies, the council’s event co-ordinator, said there was some “hostility” from retailers about anything outside their frontages — even if they were closed.

Councillor Sarah Miller, who chaired the meeting, said that everyone should be treated fairly.

She said: “What we have to do is spread the stalls out — that’s Duke Street, Friday Street and the centre of Henley. We can’t have everything in the centre. If we are going to go for more stalls let’s make them more Christmassy, more relevant stalls. Let’s spread it out.”

Town manager Helen Barnett said it would be useful to have other craft stalls but it was “really hard” to get them to commit to a few hours when they would otherwise have a pitch for a month elsewhere.

Cllr Hinton said: “If we get even five extra we can look for somewhere in Duke Street and Friday Street.”

She also claimed that some local traders were difficult to get on board.

Councillor David Eggleton complained that some fairground rides and food vendors had not cleared away before the road was re-opened and said there needed to be more bins.

Cllr Eggleton added: “Some of the fairground rides were still packing up an hour after the road was reopened and there were three or four food stalls left. We have to stick to these times.”