Teenager says thanks for new £3,200 wheelchair 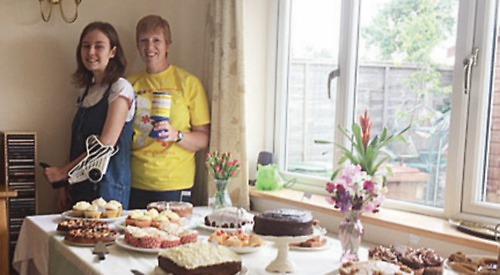 A DISABLED teenager has a new wheelchair thanks to fellow residents of Sonning Common.

Villagers donated £2,500 towards the cost of the new wheelchair, which helps her maintain her independence and go out on her own.

Charlotte had been borrowing an old wheelchair from Christ the King Church in Sedgewell Road, where she and her family are members of the congregation.

She had planned to pay for the £3,200 Quickie Helium, an ultra-lightweight model, herself.

Then Sue Nickson, of Stoke Row Road, heard about her need and decided to help.

She organised a party to mark the church’s 50th anniversary in December which raised £1,500 in donations.

As a result, word got out around the village and another £1,000 came in. The Chiltern Edge Community Association donated £500 and £200 came from both Nottakwire and the Sonning Common Christmas dinner while friends and family donated another £100.

Charlotte, who works in the customer service team at Waitrose in Henley, said: “I was shocked by how generous and kind people were.

“I was happy to pay for the wheelchair myself but everyone wanted to do some sort of fund-raising.

“It makes a huge difference because I have more energy and I am able to do more.”

Despite being injured regularly, she and her mother Karen did not think anything of it.

But in February 2014 she dislocated her right shoulder while playing squash, which led to more than two years of problems before she was diagnosed with Ehlers-Danlos syndrome.

The condition affects connective tissue in the body, which causes joints to dislocate easily, extreme tiredness and digestive problems.

Charlotte said: “It affects collagen and there is collagen in everything so it affects everything. It’s like I’m being held together with rubber bands.”

She had several operations on her shoulder while studying for her
A-levels at The Henley College. Charlotte said: “It did not get better, so the diagnosis was a relief as it at least gave me an answer.”

Mrs Broadbent said the diagnosis had explained a number of unusual things from her daughter’s childhood, such as learning to walk late.

In May last year Charlotte was diagnosed with postural orthostatic tachycardia syndrome, an abnormally large increase in her heart rate after sitting or lying down, causing dizziness and fainting. It is common in people with Ehlers-Danlos syndrome.

She explained: “When you get up the blood pours into your legs. My heart goes really fast and my blood pressure gets really low. For me walking is like running a marathon.”

Members of the church decided to help after Mrs Broadbent told them Charlotte was unable to attend but was going to buy a wheelchair to help her be more independent.

Charlotte chose the Quickie Helium as it weighs only 4kg so is easy to carry. It has a special seat which provides stability for her pelvis, which regularly dislocates on her left side.

She said: “It means I can go out for longer and on my own to catch the bus. I hadn’t been able to drive for ages because of a hip operation I had.

“I have discovered the pavements in Sonning Common are terrible! People think I have the wheelchair because of my hip problem but it’s more to do with the amount of energy I have.

“My heart goes to about 150 beats per minute from walking. It’s hard because people look at me and I seem perfectly normal.”

Since she was diagnosed Charlotte and her mother have raised £2,000 for the Ehlers-Danlos Support UK, the country’s only charity for the condition.

They are members of the South Chiltern Choral Society, which is based in Sonning Common, and had a collection at its Christmas concert in 2016. Charlotte told the audience about her condition and how the charity had helped her.

They also held a concert at the church and Charlotte hosted a tea party last summer, which meant she could do lots of baking.

This is one of her favourite ways of distracting herself from the chronic pain she suffers, which can’t be controlled by drugs.

Charlotte studied A-level music, ancient history and biology and had an offer to study nursing at Southampton University but had to turn it down when her condition worsened.

“I like to help people and I like to think I am ‘a caring person’,” she said.

“Now teaching or music are going to be my focus. I want to make a difference in the world.”