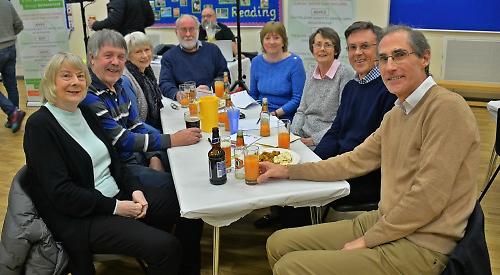 A QUIZ night in Charvil raised more than £1,300 for a charity.

Nine teams took part in the event at Charvil Piggott Primary School with names including Load of Bulldog, Kitten Klub and No Hope (or Charlie).

There were questions on music, logos and place names. The quiz was won by Still Crazies, who were awarded a trophy, while a team from Reading design firm Syntegra was awarded the wooden spoon for coming last.

The quiz was in aid of the child bereavement charity Daisy’s Dream and volunteers wore branded
T-shirts and put information boards around the school hall. There was food served by Cook Curry Club, a bar, raffle and auction.

Organiser Claire Rhodes said: “We’re delighted with the fantastic support from the local community including all those who attended, everyone who donated prizes and our wonderful volunteers. We need to raise around £400,000 each year and as a small charity with no government funding, events like this make a huge difference to our ability to support children through the really difficult times, when they are facing a bereavement or someone close to them has died.”