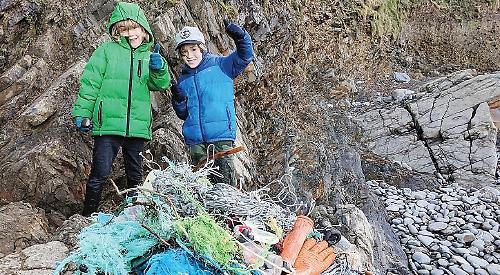 THE first ever village-wide clean-up is to be held in Sonning Common.

Emma Lawrence, of Peppard Road, is organising the event on April 29 and hopes dozens of residents will volunteer to collect litter.

She is being supported by the parish council and all the equipment will be provided.

Teams of volunteers led by a co-ordinator will tackle litter hot spots, including Reades Lane near Chiltern Edge School, Blackmore Lane, Peppard Road near the Herb Farm, Blounts Court Road and the woods off Woodlands Road.

People will be asked to litter-pick for about an hour and will then be offered cakes and drinks at the village hall.

Mrs Lawrence, who works for BBC Berkshire and the Reading Between the Lines theatre company, already carries out litter-picks in the village with her husband Alex and their children Stanley, nine, and Benjamin, seven.

She said: “It breaks my heart to see litter. I’ve been picking litter since I was eight when I was growing up in Worcestershire.

“When I had children one of the most important things I wanted to teach them was about not distributing litter across the world.

“Now, whenever we go to a beach, they bring something home with them that should not be there.

“My husband often despairs because we leave with a haul of rubbish dragging behind us.

“If everybody in the world went away from a picnic site or beach with something that should not be there it would make a massive difference.” Mrs Lawrence is being helped to organise the event by fellow villager Geoff Davis.

Estate agent Davis Tate will provide 50 tabards for children to wear and parish councillor Dirk Jones is providing hi-vis jackets for the adults.

Mrs Lawrence has also approached Johnson Matthey about helping to clean-up the area near its research centre in Blounts Court Road.

She is also going to give a talk about the initiative at Sonning Common Primary School, where her children are pupils.

Mrs Lawrence said: “The village is not short of volunteers and the residents are good at supporting other people. I’m not sure how many people we are going to get but this gives people a chance to get involved and be part of something they can feel proud of.

“I always say to the boys that even if we pick up only 10 items of litter it could make a difference to an animal. It all makes a difference.”

Parish councillor Leigh Rawlins said he hoped the event would be a success and that it could be repeated.

Speaking at a parish council meeting, he said: “It seems to be the right time with the weather warming up and before there is too much plant growth to cover up the litter.”

Councillor John Stoves said: “I would like to see us tackle the roads at the perimeter of the village.

“Anything that is done will be an improvement.”

Parish clerk Philip Collings said the problem of litter was brought home to him while driving to Oxford.

“I couldn’t stand the amount of litter exposed in the hedges,” he said. “We can’t deal with that but we can do our own bit to help.”

On the day, volunteers should meet at the village hall at 10am. For more information, email soco.springclean
@gmail.com