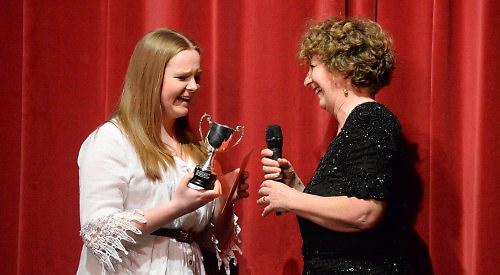 PAST and present stars of the Henley Youth Festival came together for a gala performance to mark 25 years since it began.

The event at the Kenton Theatre in New Street on Saturday evening was the climax of this year’s festival, which had the theme of “celebration”.

It featured the best from this year’s young musicians and singers as well as previous performers.

The show, which was attended by about 200 people, was hosted by festival founder Alfie Hay, former chairwoman Helen McClure and previous performers Simon Classey and Molly Liddell.

Mr Hay, from Bix, told the audience: “We have got a miscellany of young performers from this week and slightly older ones from several years ago to showcase the talents they have got.

“There are a few nostalgic photographs and films. That’s a good mix. It’s a bit like having your cake and eating it. We like welcoming new people to the festival and to Henley, so I thought we would welcome a newcomer.”

Mr Hay then revealed special guest Mary Berry, who moved to Henley last year. She was cheered and applauded as she appeared from behind the curtain.

The cook, writer and television presenter told the audience about why she chose the town.

“My children live very near here,” she said. “I was on holiday with my husband and he said, ‘if anything happened to me would you stay in our house?’ I said, ‘no, no, no, I would want to be near the children’.

“I told our young — they’re not that young, they’re 50 and 45 — and told my daughter Annabel. She said, ‘right, what about Henley?’ I said, ‘oh, Henley would be lovely’. She found the house in two weeks. We’re terribly happy to be here. We have a perfect place.

“We can walk into town and we have got a letterbox in the wall so I can post my letters.”

This was for the quintet’s version of Close Every Door from Joseph and the Amazing Technicolor Dreamcoat, which was the closing performance of the night.

Berry gave each girl a small gift and asked them to announce their names before calling them “the magnificent five”.

The show was opened by Dolly and the Dinosaur, a band made up of students at The Henley College and Sir William Borlase’s Grammar School in Marlow, Adam Cox (vocalist and guitarist), Ben Porter (guitarist), Rohan Misra (drummer) and Tom Priestley (bass guitarist).

“We have gathered memories from over the years from people who have been involved in the classics and the recent people.”

He read a memory from Janine FitzGerald, another founder of the festival, telling the story of Jamie, a seven-year-old boy who tried to juggle oranges on stage.

She wrote: “He had never performed before and couldn’t juggle. He picked up the oranges and just carried on until someone from the wings whispered, ‘you can stop now, take a bow’.

“With tears in my eyes I joined the standing ovation of clapping and cheering. I will remember the courage of that small boy appearing on stage, on his own, in front of a live audience, in a real theatre.

“He will be 30-something now and I wonder if he will remember that moment of stardom.”

Seven-year-old dancer and entertainer Ethan Bentley, from Valley Road School, performed to Justin Timberlake’s Rock Your Body. His routine included stomach waving and a disappearing red light. This was followed by Mr Classey interviewing Rebecca Dixon and Henry Betts, who were shown in a video of them performing together at the Kenton as children.

Miss Dixon, of Gravett Close, Henley, recently won an award for her film Self, a 12-minute science fiction drama about our obsession with technology. Mr Betts, of Northfield End, Henley, provided the special effects.

Katie Moberly, 22, from Henley, performed her own song, Shadow of My Love, singing over a track of herself playing the ukulele made with a loop pedal.

She was followed on stage by dancers Evie Decardi-Nelson and Lucy Herbert, who performed to Come Alive from the film The Greatest Showman.

Miss Liddell was then interviewed on stage by Mrs McClure.

She told the audience how the youth festival helped build her confidence as a performer and she is going to perform at the Edinburgh Fringe this year with friends from university. Mrs McClure said: “It’s lovely how a lot of these performers have carried on doing what they started when they were here and carried it through to them being young adults.”

Miss Liddell performed I Dreamed a Dream, from Les Misérables, accompanied by Darius Halpern on the piano.

He was followed by Jodi Anderson, from Sonning Common, who sang and played the piano for her own song called Crimson Red.

Emily Heath, 19, from Henley, was interviewed by Mrs McClure.

She said: “I started singing with the youth festival and that’s the thing I have continued to do.

“Apart from singing at university, I now sing with the City of Birmingham Symphony Orchestra and got to perform at a lot of proms and with the BBC proms youth choir.”

Miss Heath then sang If I Loved You from Carousel by Rodgers and Hammerstein.

The audience was shown a promotional video for this year’s festival with highlights from last year, which was produced and edited by Finn Flood.

Dancer Beth Bowen, 19, from Henley, then took to the stage to perform her own dance, entitled On the Nature of Daylight.

She was followed by about 20 pupils from St Mary’s School who took to the stage with Lucy Hewes, of Henley Rock Choir.

To warm up their voices, the children performed My Bonnie Lies Over The Ocean to which the audience had to raise and lower their hands with every word beginning with the letter B. The choir then performed Sing by The Carpenters, having learned the words and made up their own actions in a school workshop.

After a short interval, the show restarted with an excerpt from Hiawatha, originally a poem by Henry Wadsworth Longfellow.

It was performed by about 40 people who attend the Acorn Music Theatre Company, directed by Gail Rosier.

Mrs Henwood said: “I’m thrilled and delighted to have this very beautiful young woman standing on stage beside me.

“She is not only so talented, but she is a giver. She gives and gives and gives. She always has a smile on her face. She has love in her heart. She is a truly special person and she just absolutely embodies what Henley Youth Festival is all about. I love you, Molly Liddell, and I am honoured to present you with the Elizabeth Griffin award.”

She then hugged Miss Liddell, who was visibly moved.

Mr Hay said: “It is well-deserved. I would like to thank all the people like Molly, who help out and give endless time to make this work.

“Hundreds of people do it and there is no reward other than the joy of seeing it work. Thank you to all the helpers.”

Drummer Oscar Scannell then performed an Eighties medley including Sweet Dreams by Eurythmics and Flashdance...What a Feeling by Irene Cara. He encouraged the audience to clap along while he played.

He was followed by Amelie Jolly, who danced to Apologize by One Republic. A video sent in by award-winning folk singer Megan Henwood was then played.

She talked about what the festival meant to her, saying: “A heartfelt thank-you to anyone who has been part of making the Henley Youth Festival happen over the years.

“For me growing up, it was such a big part of learning about myself creatively, building my confidence as an awkward and shy young person and learning what it felt like to be on stage and experiencing that in a professional and safe environment.

“It has subsequently shaped the rest of my life and career. They were always so encouraging and supportive of the people involved to explore their creativity and original ideas.

“For me that was invaluable at the time, so I mean it when I say I am very grateful and owe a lot to everyone that was part of that. Many other young people growing up in Henley, I’m sure, will feel the same.”

The audience was shown a video telling the story of the making of her song River.

There was a then duet by Mr Classey and Emma Piercey-Fisher, from Shiplake, who runs the Tiny Gallery in Hart Street.

She said: “I first entered HYF with my sister, then I danced with two of my best friends and then I did a little bit of acting as well. I covered all the bases!”

The pair gave a rendition of Falling Slowly by Hansard and Irglova.

She was followed on stage by Ellie Vockins, who sang Ave Maria by Schubert. She was invited to perform at the gala after receiving a standing ovation at this year’s Sing event.

Mr Hay’s daughter Bethan Adelekan then spoke about her memories of various musicals performed at the festival.

When it started her father would write music for all the schools to learn and then come together to perform.

A video was then shown of Huw Wiggins, from Shiplake, a saxophonist and professor at the Royal Academy of Music. It showed him playing the recorder as a youngster.

This was followed by Stevie and Gemma Fitchett singing Anyone Who Had A Heart by Burt Bacharach and Hal David.

Mr Hay was presented with a 25th anniversary present by Mrs McClure and Miss Liddell, which he unwrapped on stage to reveal a picture frame filled with memories and praise for him.

Speaking after the event, Mr Hay said: “It was lovely hearing from the acts from previous years and seeing and hearing what they have done since.

“I was so proud to be able to see the talent on show and say, ‘this is our town and our youth festival’. I did not envisage it lasting this long but I knew finding out what youngsters were donig and finding venues to celebrate it was a winner.”

Kate Swinburne-Johnson, co-chair of the festival, said: “It was a really, really lovely evening.

“There was the mixture of old friends coming back, previous performers from the week and people talking about the festival and how it had encouraged and inspired them.

“The gala showed we were keen to mark 25 years since the festival started and hopefully we will carry on and look to the next 25 years.”

She thanked the businesses and individuals who support the festival, which costs about £25,000 to run each year and involves more than 2,000 children, and the 50 volunteers who help to run it.

Mrs Swinburne-Johnson said: “It would not happen without the sponsors and volunteers. It has been a really special year for us.”