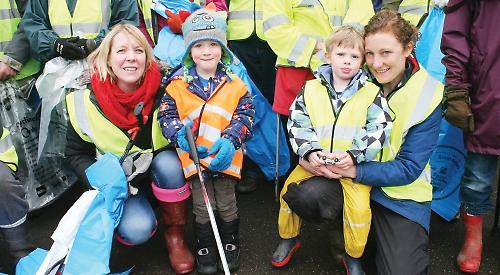 TWENTY-SIX volunteers took part in a litter-pick in and around Nettlebed.

The volunteers split into teams covering four different areas: the A4130 towards Bix, two sections of the B481 going towards Highmoor and Watlington and the eastern section of Port Hill.

They included two children, Edward McCarthy, three, who was accompanied by his mother Clare, and two-year-old Sam Topley, who came with his mother Alice. The groups picked up about 24 bags of rubbish, mostly food wrappers and plastic drinks bottles discarded from passing cars.

The bags were gathered by parish councillor David Butler for disposal or recycling.

Afterwards, the participants were served free tea and coffee at the White Hart pub.

“Everyone worked hard,” he said. “Given the cold and slightly wet weather, it was all the more impressive that so many people were willing to work together on what isn’t a particularly pleasant task.

“It appears that most of the waste was thrown from cars so we’d urge drivers to be more considerate and dispose of their rubbish responsibly.”

Similar litter-picks were held in Benson and Whitchurch. These had been due to take place on March 3 but were postponed due to the heavy snowfall.

Last month, Johnny Grimond, from Highmoor, called for a “war on litter” because he regularly clears large amounts of rubbish from the verges near his home, mostly non-biodegradable takeaway coffee cups thrown from vehicles.