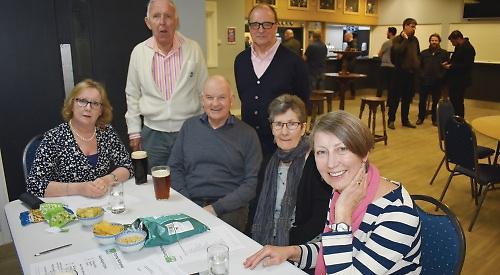 A QUIZ night in aid of Camp Mohawk was won by a team formed just minutes before the first question was asked.

Who Are You? was formed by some individuals who were attending the event and decided to join forces at the last minute.

The annual quiz was held at Redingensians Rams Rugby Club in Sonning on March 21. A total of 10 eight-strong teams took part, answering questions on topics, including unusual queries such as the colour of whale poo.

The teams were served Thai curry cooked by the club chef and there was a raffle with a prize donated by each team. The quiz, which was organised by the Friends of Camp Mohawk, raised £1,000 for the day centre for children with special needs near Crazies Hill.

Fund-raiser Annabel Hill said: “It was another great fund-raiser with much laughter.

“Events like this create an opportunity for our supporters to have an enjoyable night out while raising important funds — it's a win/win for us. Many thanks to all who attended and also to our excellent quizmaster, Chris Stillman, who is one of our trustees.”

The charity’s annual golf day will be held on Friday, June 29.

More details will be announced nearer the time.