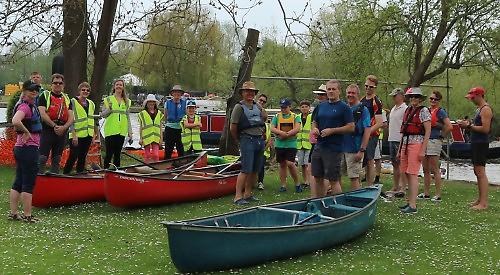 ABOUT 100 volunteers cleaned the streets of Henley on Saturday morning.

By the end of the blitz, the volunteers had collected 30 bags of rubbish containing plastic bottles, cans, cigarette ends, takeaway boxes and wrappers from the town centre alone. Many more bags were filled with litter found on the outskirts of town.

The Henley sea cadets, cubs, scouts and a brownie helped pick up litter in the town centre, while RNLI volunteers tackled Fair Mile and about 20 members of the Friends of Freemans Meadow cleaned the beauty spot.

The other areas tackled included St Mary’s churchyard, the station, Mill Lane and around Jubilee Park, off Reading Road.

Town councillor David Eggleton and members of the Gainsborough Residents’ Association cleaned their estate, while children and parents from Rupert House School cleaned the school grounds in Bell Street.

In Freemans Meadow the volunteers picked up litter, glass and dog mess as well as scrubbing the bench by the bus stop on Fair Mile.

They also tidied up, taking suckers off the trees lining the Luker Avenue border and removing ivy from the historic wall/garages in the corner, cleaning equipment and signs, weeding the play area, strimming the edges of the play area and laying bark donated by the town council’s parks services on two muddy footpaths leading to Luker Avenue.

Mayor Kellie Hinton, chairwoman of Henley in Bloom, which organises the annual clean-up, said she was delighted with the number of helpers.

She said: “We had almost 100 people going out and picking up litter and that’s much more than we normally have. It was amazing and I’m so thrilled. There wasn’t an area, I don’t think, that we didn’t cover.” Councillor Hinton credited fellow town councillor Sarah Miller and anti-plastic campaigner Julia Carey, of Reading Road, for boosting the numbers thanks to their recycling initiatives.

She said: “It seemed to be a lot more popular and a lot cooler, dare I say, to be out picking up litter.

“When you’re actually out and about looking for it you see so much. I have to say the town was in a bit of a state. I do think we should have more than an annual spring clean but it needs volunteers to organise these sorts of things.

“People were kind of disgusted by the amount of litter there was but really pleased it was cleared.”

Deputy Mayor Lorraine Hillier, who runs the Hot Gossip coffee shop in Friday Street, donated soup for the volunteers and this was served by members of Henley Lions Club.

In the afternoon resident Jessica Sinclair organised a river clean-up.

About 30 volunteers gathered at the Eyot Centre, off Wargrave Road, before taking to the water in a variety of craft ranging in size from single kayaks, canoes and paddleboards to a bell boat.

The teams scoured the riverbanks and islands from Marsh Lock to Phyllis Court Club using litter-pickers provided by Biffa.

More than eight sacks of rubbish were collected over two hours, including large amounts of plastic, 29 tennis balls, a pair of socks, a plastic swimming pool, a trainer, a large storage chest and a pot of lip gloss.

The rubbish was taken back to the Eyot Centre, where the recyclables were sorted into three bags of glass, plastic and aluminium.

Mrs Sinclair said: “Apart from being a danger to wildlife and harming the environment, the rubbish looks ugly and spoils the experience of this beautiful stretch of the river.

“As a river user it’s depressing to see but being right on the water, in a canoe or paddleboard, gives you an opportunity to get into the nooks and crannies where the litter collects. Plus, there is a real sense of satisfaction untangling a plastic bag from a tree and leaving the river a cleaner, nicer place.”

Volunteer Maria Loring said: “There are always going to be things which get into the river by accident, such as balls thrown for dogs, but it’s staggering to see how much rubbish actually ends up here.

“People need to understand that when they leave their cans and crisp wrappers behind, even if they put them in a bag by the bin, they blow into the river and can cause problems for wildlife as well as looking a total mess.”

If you would like to help, call Cllr Hinton on 07527 826706 or email bloom@henleytowncouncil.gov.uk