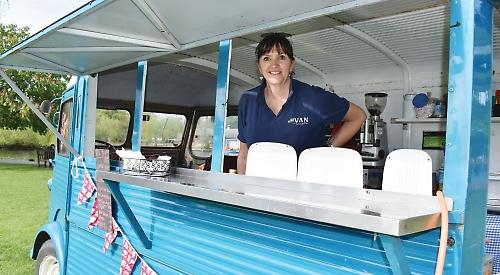 LIVE music, a hot dog van and fairground games were among the attractions at a charity fund-raiser held in Mill Meadows, Henley.

Connor Wright, a student at The Henley College, arranged the event in aid of Sue Ryder on Thursday last week.

It fulfilled an assignment for his business studies course in which he must organise an event.

More than 40 people attended the event, including Henley Mayor Kellie Hinton and her daughter Hallie, seven.

Connor, 19, who lives in Middle Assendon, arranged for his friends’ band Midnight Filter to perform on the bandstand and other students helped him run the event.

Food and drink was available at the French Coffee Van, run by family friends Sharon and Phil Dombey, and there was a raffle with prizes donated by individuals and local businesses including Cook in Duke Street, the Regal Picturehouse in Boroma Way and Raju’s restaurant in Reading Road.

Other attractions included basketball and a game where visitors could win plastic cups of sweets by successfully throwing a tennis ball into them.

PA systems for the event were provided by Stoke Row School.

Connor said: “The guests all thought it was good and many of them said they had a nice time. I think it went well, it was a good day and also nice and sunny.”

Cllr Hinton added: “It was fantastic and my daughter won a jar of sweets.

“I loved the music and the enthusiasm from all the lads organising it. It was a great idea for a very worthy cause close to all our hearts.”

Connor had been given permission by Henley Town Council to use the riverside beauty spot.

The event raised about £600, which will be presented to Sue Ryder along with money raised at other events organised by other students, including a bingo session at the Acacia Lodge care home in Quebec Road.

Other students have held cake sales, a FIFA gaming competition and a football tournament.

Business studies teacher Rhian Mason said: “ “The money raised is still being collected and will be formally presented to Sue Ryder.”