Sun brings out the crowds for May fayre 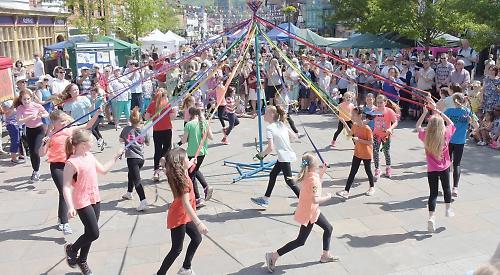 A BOY of eight was crowned Henley’s May King for the second year running.

Ethan Procter was awarded the title after coming joint first in the fancy dress competition at this year’s May Fayre, which took place on bank holiday Monday.

Thousands of people visited the event in Market Place on a sunny afternoon with temperatures in the mid-twenties. There were long queues for ice creams and cold drinks.

It was the second year running that the fayre had been held in the town centre, having been moved from Mill Meadows last year, and organisers hailed it a success.

The fayre was opened by Mayor Kellie Hinton and special guest Iris Helfner, six, who lives in America and is a family friend of mayor-elect Glen Lambert.

Last year, she spent 73 days in hospital undergoing heart surgery and recovering from life-threatening complications. In one of her first mayoral acts, Councillor Hinton sent Iris best wishes on the town’s behalf and she repaid the favour by visiting Henley with her father Karl.

Before the ceremony, her hair was styled by Henley hairdresser Milly Kennedy.

A Maypole dancing display was given by children from Steph’s Dancing Divas and Dudes, who performed a series of routines around a pole in Falaise Square while wearing tops of different colours.

The Ellington Morris side, from Maidenhead, also performed several dances in the Cotswold and Border traditions accompanied by an accordion player.

Singer-songwriter Katie Moberly took to the town hall stage and played several of her own compositions on ukulele and bass guitar.

Lucy Porda sang several numbers including John Legend’s All Of Me while the Rupert House School choir performed Colours of the Wind from Pocahontas, among other numbers.

Guitarist Felix Richardson, 10, and his sister Didi, eight, a drummer, of Deanfield Avenue, Henley, performed Waterloo Sunset by the Kinks, I Won’t Back Down by Tom Petty and Hey Hey, My My (Into The Black) by Neil Young. The final act of the afternoon was soul singer Jamie Bruce, of Reading Road, Henley, whose set included Soul Man by Sam & Dave and Play That Funky Music, White Boy by Wild Cherry.

In the fancy dress competition, Ethan, of Singers Close, Henley, turned up dressed as an old-fashioned gangster in a pinstripe jacket with matching trousers, a fedora and sunglasses.

He bought the costume for a Halloween party last year, when he dressed as a “zombie gangster” from Bugsy Malone.

He shared the title with George Nearn-Stuart, also eight, from London, who dressed as P T Barnum from the film The Greatest Showman.

George’s sister Giselle, six, was made joint May Queen for her cheerleader’s outfit.

The other May Queen was six-month-old Camilla Birkett, from Sonning Common, who wore a fairy costume with a light green dress and matching wings.

Her outfit was picked by her sister Serenna, three, who had also entered the competition.

The competition was judged by Angie Best, who runs the Metaphysical gym at Henley Business School.

After speaking to each of the 10 entrants, she asked the audience to cheer for each one and then picked the ones who received the loudest applause.

The winners were presented with tickets to this year’s Christmas pantomime Dick Whittington at the Kenton Theatre in New Street. Ethan, who won last year’s competition by dressing in a suit and bow tie with a walking cane, said: “I like Bugsy Malone and was looking through my drawers to see if I had anything that would work.

“I’d saved up some money but not enough for a new costume. I thought this looked nice so I said ‘why not go with this?’ It’s a good outfit and it worked well.”

His mother Amelia Kennedy said: “He’s very happy to have won again. We had to replace the shirt as it had fake blood on it but luckily everything else was still clean.”

Camilla’s mother Claire said: “This is a very special moment for her, especially as she’s so young. She’s such a professional and has been so well-behaved throughout the ceremony. It’s nice for her sister too as she chose the costume.”

Mrs Best said: “It was absolutely fabulous to see the kids enjoying themselves.

“The competition is impossible to judge because the costumes are of such a high quality and you don’t want to hurt anyone’s feelings at such a tender age, which is why I wanted some help from the audience.

“There was a lot of fairy costumes among the girls but everybody made a terrific effort and looked great.”

The fayre featured dozens of stalls, games and attractions including a teacup ride, a pedal car arena for younger children, face painting and a “test your strength” machine as well as a wire buzzer and coconut shy run by the Henley Air Cadets.

Crews from Henley fire station in West Street were showing their kit and engine to the public and young children could sit inside. They also sold toys and collected for the Firefighters’ Charity. Community groups including Henley in Transition, the Henley branches of the RNLI and Royal British Legion and the Friends of Trinity Primary School ran fund-raising stalls while the Kenton Theatre ran a “straw draw” with prizes.

Owen’s Animals, from Emmer Green, had a stand where children could handle exotic animals, including different types of snake and a bearded dragon.

There was a Prosecco bar and a fish and chip van run by Stovell’s of Henley, while staff from the Catherine Wheel pub in Hart Street ran a barbecue.

Three women from the Enchanted Players Theatre Company, of Twyford, walked around the site greeting visitors while dressed as fairies and blowing bubbles.

The fayre concluded with the tug of war, which was won by a team from the Row Barge in West Street, who defeated last year’s champions from the Argyll in Market Place.

Also taking part were the Tweed Pullers, a team of men and women who wore Edwardian attire and were captained by Felix and Didi’s father Matt, and a team from the Saracen’s Head in Greys Road.

About 200 people gathered to watch and cheered loudly.

Joe Miller, landlord of the Row Barge and the team captain, said: “We trained very hard by sinking five pints before we started as we felt the weight of fluid was a crucial factor.

“Now that we’ve won I think we’ll continue in the way we started!” Town councillor Sarah Miller, who organised the fayre, said: “It was a blisteringly hot day but that brought people out and the feedback has been very good indeed.

“There were more stalls than last year and we’ll hopefully add even more next time. I think the town centre location works far better — it’s where I remember the fayre happening as a child.

“I’ll be interested to see how the shops and cafés did but it has to have been good for trade and I would hope everyone benefited.

“The children really make it, from the pair playing rock songs to the Rupert House School choir. They’re just so talented. The tug of war was the icing on the cake.

“On a personal level it’s very rewarding to see it succeed, although I think people are always willing to get behind it. It’s hard work as I have kids, work full-time and am a councillor. You can never be certain who’s going to turn up but it’s wonderful to see it going well and watch everyone having a great time in the sunshine.”

Councillor Gawrysiak said: “It was a fantastic community event and every bit as popular and successful as our Christmas festival.

“I always enjoy doing my bit by linking everything together and telling people what’s going on — I’m sure many people would agree I’ve got a big mouth!”

Councillor Hinton said: “It was utterly amazing and I feel privileged to have been part of Sarah’s team.

“She works so hard all-year round and barely gets a break as the planning starts as soon as the previous fayre wraps up.

“The tug of war was great and I can see that becoming a real fixture in the Henley calendar.

“The fayre was a good bit of old-fashioned entertainment and the weather was amazing and, if anything, it was perhaps a bit too hot.

“It was the culmination of a great bank holiday weekend and I was honoured to attend as one of the final events of my mayoral year.”

Councillor Hinton said Iris, who spent several days in the town, enjoyed the fayre and spent most of it playing with her seven-year-old daughter Hallie.

She said: “The two of them hit it off straight away and were going around all the rides before taking a break in Mill Meadows.

“Iris keeps asking her father when she can come back as I think she thinks it’s like this all the time!”