Guitar concert with tapas and wine raises £1,800 for hospice charity 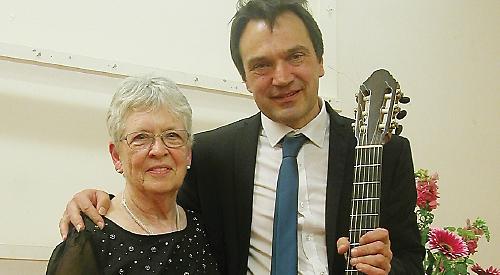 A CONCERT in Sonning Common raised £1,800 for Sue Ryder.

Professional guitarist David Jaggs performed at the village hall in Wood Lane on Friday in front of an audience of 80 people.

The event was organised by Margaret Moola and Elaine Williams, who run Nottakwire.

Guests were served tapas, prepared by Sandy Onofrio, and a glass of wine, which was also donated.

The second half included pieces by Gershwin, Jerome Kern and Cole Porter followed by themes from films including Les Misérables and The Deer Hunter.

Sue Hedges, from Gallowstree Common, created two flower arrangements for the occasion which were then donated to the hospice in Nettlebed and placed in the sanctuary for staff and patients.

The event was sponsored by the Chiltern Edge Community Association, which helped cover the running costs.

Ms Moola said: “Responses to David’s performance were ecstatic and you could hear a pin drop in the hall throughout his recital. Many members of the audience insisted that it should be repeated on an annual basis.

“Not only was it a success due to the warm reception of the wonderful musicianship and programme — but also to the sum of £1,650 raised.

“David himself made a personal gift towards the proceeds, as well as donating 20 per cent from the sale of more than £200 of his CDs.”

Nottakwire will hold its next event on June 23, from 10am to 5pm at the village hall.

The group is arranging “Going For A Song”, which is a whole day of music, refreshments, games, stalls and other activities. It is raising money for village charities and groups.

Ticket cost £5 for the whole day, with children under 12 going free. They are available to buy from Occasions in Wood Lane.