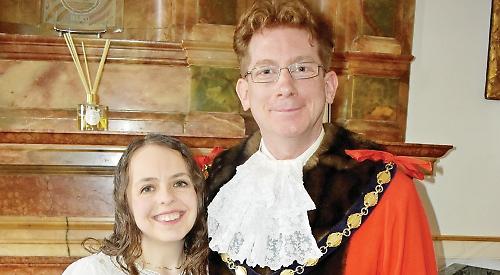 THE new Mayor of Henley says he wants people to work together to make a difference in the community.

Glen Lambert was sworn into the role at the town’s annual mayor-making ceremony, which took place at the town hall as part of Henley Town Council’s annual meeting on Monday morning.

The 42-year-old software developer, who lives in Greys Road with his wife Anna and children Syd, 17, and Julia, 11, succeeds fellow Henley Residents Group councillor Kellie Hinton, who handed over the chain of office in front of about 100 people.

Councillor Lambert hopes for a smoother relationship between his party and the Conservatives following a series of spats in the council chamber.

He said: “It is an honour and a privilege to stand before you as Mayor. I joined HRG because I wanted to put something back into Henley and it has been an absolute pleasure to work with such a strong team of dedicated, diverse people who genuinely like one another and work so hard for the good of the town we all live in and love.

“Henley Town Council has a very busy year ahead as we begin our rewrite of the neighbourhood plan, launch the new bus service, produce a new transport strategy and launch a number of initiatives to improve air quality. As Mayor and chairman of the council I am optimistic that we can work together on these cross-party projects and all benefit from a more harmonious council chamber.”

Councillor Lambert, who serves Henley’s South ward, has lived in Henley since 2008. He first stood for election in 2015 but failed to win a seat by four votes.

He stood again in a by-election in May last year and won, taking over from Conservative Martin Akehurst, who had resigned on health grounds.

Cllr Lambert was proposed as Mayor by Councillor Ian Reissmann, the chairman and leader of HRG, and seconded by Councillor Sarah Miller. All present voted for him apart from Conservative councillors Donna Crook, Julian Brookes and Sara Abey, who abstained.

Councillor Reissmann said: “In the short time that Glen has been a member of this council, it has become clear that he is thoughtful and considered in his words and actions. Experts who rely on facts and evidence and consider them carefully are somewhat out of fashion and in that sense he isn’t a ‘modern’ politician. He is a logical thinker who thinks things through carefully before making up his mind.

“He is always willing to say ‘I don’t know’ or ‘I don’t understand’ and then listen to what others have to say. He is bright and learns quickly, which is a good thing because when you’re Mayor you’re never short of people wanting your opinion and giving you theirs. He has an inner strength and isn’t easily put off.

“Three years ago, he suffered the disappointment of not being elected to this council by a margin of just four votes. However, he stuck at it and when another chance came along he grabbed it enthusiastically. It was a great illustration of Rudyard Kipling’s quote that ‘if you can meet with triumph and disaster and treat those two impostors just the same… yours is the Earth and everything that’s in it.”

“If not the earth, he did win the Mayorship and Henley will have a Mayor who cares deeply about the town. He combines determination and thoughtfulness with an easy likeability which, along with his ability to keep his feet on the ground, will serve him well.”

At the start of the ceremony, Cllr Hinton was led into the Queen Elizabeth Room by acting town sergeant James Churchill-Coleman, who carried the ceremonial mace, and followed by town clerk Janet Wheeler.

The Mayor’s chaplain Rev Duncan Carter, vicar of Holy Trinity Church, began the proceedings with prayers before Cllr Lambert was voted into office. He signed the declaration of acceptance then left the hall to exchange robes with his predecessor. They then returned to the hall and swapped chairs before Cllr Hinton placed the mayoral chain around her colleague’s neck.

The event was attended by representatives of community groups and dignitaries including Oxfordshire deputy lieutenant Michael Macfadyen and his imminent successor Lady Hall, of Henley.

Cllr Lambert named Gillotts School as the first of his three Mayoral charities, which was inspired by Cllr Hinton’s decision to donate the proceeds from her year to Henley’s four state primary schools. The second will be Henley Music School, a charity which teaches music to people of all ages and offers free instrument loans as well as bursaries for up to 100 per cent of the tuition costs.

He will also campaign to launch a new service in Henley for dementia sufferers and their carers. This will replace the Bluebells day service which used to meet at the Christ Church Centre in Reading Road but folded after Oxfordshire County Council withdrew its subsidy to cut costs.

Cllr Lambert paid tribute to his wife for supporting him. He said: “As I look forward to the year ahead, I take great comfort from all the support around me — particularly from my best friend of more than 20 years: my wife, soul mate, mother to our wonderful children and now Mayoress, Anna. Neither of us has ever sought the spotlight or courted publicity, but we have always been there for each other. We do everything together and I would not be standing here today without her.

“We have spoken to several former Mayors about their experiences and all have talked fondly of their terms. The groups and individuals they met, the new experiences they enjoyed, the stories they were told, the things they achieved and the money they raised for charity — all overwhelmingly positive memories. Anna and I are humbled and excited by this opportunity.”

Cllr Lambert then thanked Cllr Hinton, of Queen Street, who was the first person he approached when he wanted to stand for election, for her “shining example” and “tireless efforts” as mayor.

He said the 32-year-old had attended almost 400 civic functions during her year, more than any previous mayor, and congratulated her on being named the best young councillor in Britain by the National Association of Local Councils last year.

Cllr Reissmann proposed a vote of thanks for Cllr Hinton, which all supported apart from Cllr Brookes, who abstained, and Cllr Abey, who voted against it.

Cllr Reissmann said: “When I proposed Kellie for mayor last year I was sure she would be great. It’s difficult to describe how positive she has been but it was a joy to watch her genuine and highly infectious enthusiasm.

“Henley has been energised by her mayorship. Never afraid to innovate, she held the first outdoor civic service, which was the best I’ve attended in years. She also got the gay pride flag flying above the town hall, which was a welcome reminder of how far Henley has come in recent years.

“She chaired the full council as though she had been doing it all of her life. She was fair and assured, but woe betide anyone who stepped out of line. We’ve laughed, smiled and even cried together at the recent loss of our parks services manager Gareth Bartle. Kellie was always a hands-on mayor and involved herself in Henley in Bloom with complete commitment so his passing was hard for her.

“Kellie, you’ve been a star but with a little bit of help from Councillor David Eggleton as your escort and driver as well as your partner Ben. He likes to stay out of the spotlight but has done a lot in the background, especially looking after your daughter Hallie, your number one fan.”

Cllr Hinton thanked the town council staff, especially her personal assistant Leena Wisely, and the Mayor’s air cadet Corporal Harry Ellis, both of whom were present.

She said: “I’ve had an incredible year and most of the people in this room have been a part of that. As Mayor, you are only as good as the team around you and I have had such valuable support from my HRG colleagues, especially my consort Councillor Eggleton. It has enabled me to really focus on my role.

“After a long time as chair of Henley in Bloom, the parks team and our recreation and amenities committee are where my skillsets and interest lie. Needless to say, this has been a very hard and emotional end to a happy and successful year but as a councillor I will continue to do my best by our outdoor staff and all that we hold dear in our green spaces.

“Finally, I would like to thank Ben and Hallie and our families for not just giving me the time I needed but being there every step of the way to support me. I am looking forward to getting some work done at my job for the first time in 12 months and, of course, getting back to the most important roles in my life as a mother and partner.”

Cllr Arlett, of Elizabeth Road, who served as mayor in 1991/2 and also served on South Oxfordshire District Council for 12 years, takes over from independent Conservative Lorraine Hillier, and becomes deputy mayor for a third time. Councillor Hillier’s escort, her sister Susan George, handed her medallion to Cllr Arlett’s wife Dorothy, who will serve as deputy mayoress.