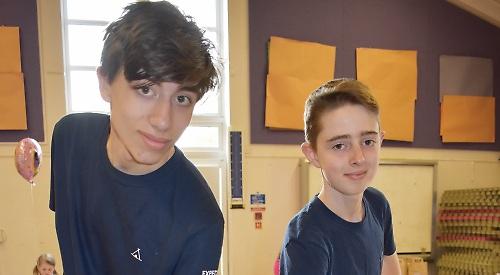 The event, which raised £1,000 for the Love Lane school, featured children’s games including beat-the- goalie and a human fruit machine as well as a fairground carousel, bouncy inflatable slide and a range of stalls.

There was a boxing game where participants had to record as many punches as possible in an allotted time, a Nerf gun tin can alley, spin the wheel game and a treasure hunt.

Girls from the neighbouring Icknield Community College had a stall to raise money for a new grand piano.

Cakes and sandwiches were donated by families and several business from the town had stalls selling items such as gift cards and childen’s books andmany donated prizes for a raffle. The top prize was two tickets to this year’s British Grand Prix at Silverstone, which were donated by a parent.

Susie Ingram, who chairs the school’s parent-teacher association, said: “It went really well. We had good support from families, friends and people from around Watlington. It was a really successful day.

“I’m absolutely delighted with the amount raised and I’m really grateful to everybody who came and helped and those who supported it.

“I think it brings the whole school community together in terms of putting the fair on with staff, parents and children all helping and it’s a really great opportunity to get the community of Watlington into the school and did just that.”

Mrs Ingram said the money would go towards new audio-visual equipment for the school hall.